So in the past six weeks, I’ve released three self-published books and it’s been really interesting. I know a lot of people really don’t have any idea how many books writers really sell. It’s kind of like money and some people are probably reticent to speak about it. But I don’t really care, so I’m going to talk numbers a bit, because things have been really interesting with these releases (also the numbers are so low it doesn’t matter).

First, for a reference point: Finding Frances. This book was published by The Wild Rose Press so my numbers come from them. They don’t get instantaneous records of sales and instead they come in in batches. With the exception of copies I bought directly from my publisher, I’ve made just under $100 in royalties over the lifetime of the book (over two years). Note that that does include royalties on copies of the books that I’ve purchased on Amazon myself (I’ve done this a few times, maybe 10-15 copies). In contrast, I made close to $150 in May alone from sales of Always the New Girl (Kindle and paperback).

Because I am a nerd, I made a chart showing total royalties over time and another one just showing individual book royalties over time. The first is going to be far more interesting after another couple months go by because right now you can only see Finding Frances royalties. (Though it’s somewhat interesting since you can see how flat it is—they’re coming in pennies at a time.) This is through May, so it technically includes Always the New Girl numbers but not Ugly numbers. 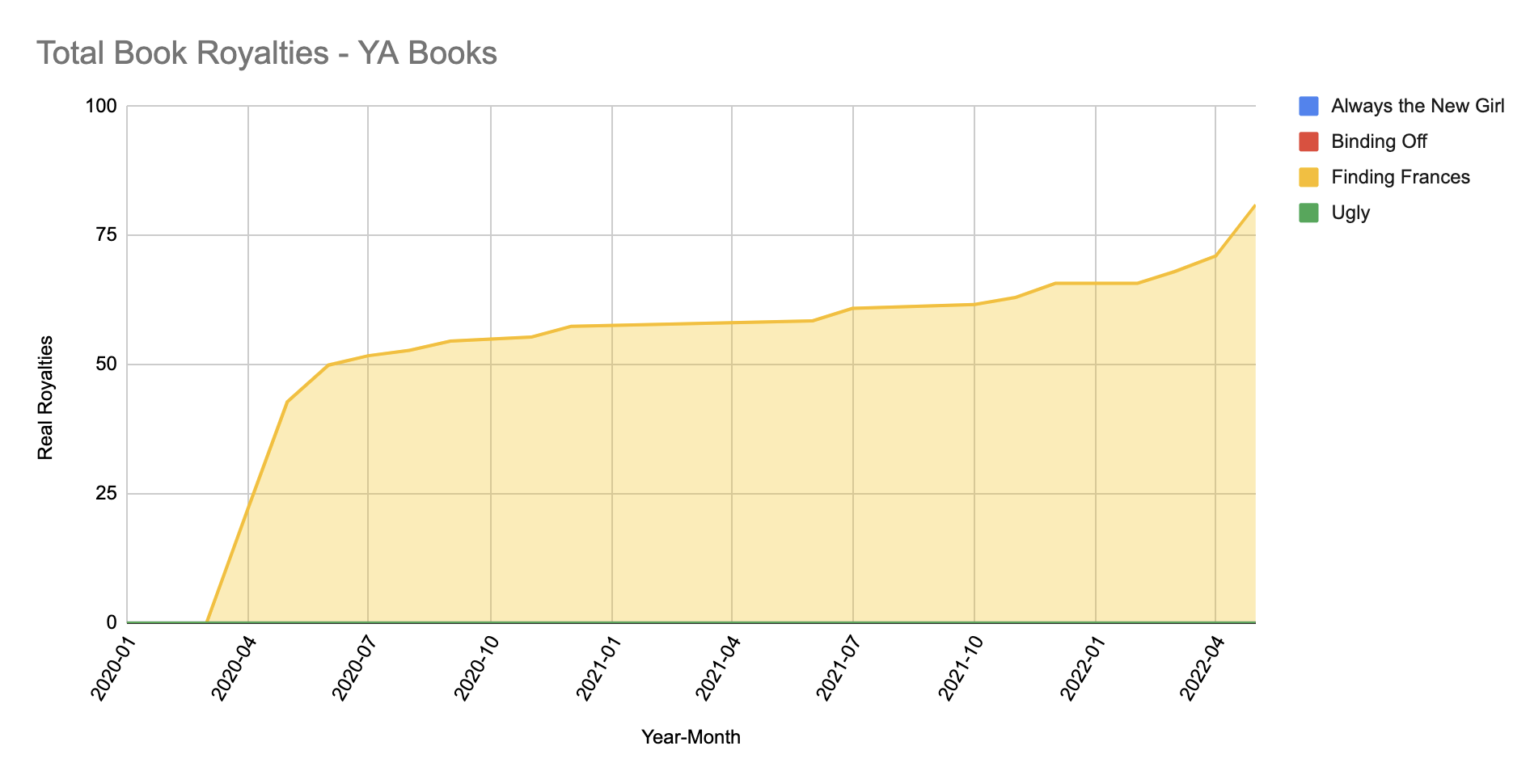 There seems to be a tiny uptick in Finding Frances sales in April and May—this is just coincidence because of the delay in reporting, so it can’t be related to my new releases coming out. But if I see growth over the next few months, I may be able to attribute it to the exposure with the new ones. This next chart shows monthly royalties over time.

You can see quite a gap between July and December of last year—I literally did not sell a single copy of Finding Frances between August and November 2021. Fun times. You can also kind of see Always the New Girl and Ugly presale numbers on the far right of the chart—that blue dot in the upper right is Always the New Girl, and the green dot just above the yellow line is the the 2 copies of Ugly I sold in May.

Sales have continued on Always the New Girl in June and sales for Ugly have also been surprisingly good (again, for me). As of June 17th, I’ve sold 13 ebooks of Always the New Girl, 4 of Ugly, and 1 of Binding Off, and in paperback I’ve sold 4 of Always the New Girl and 23 of Ugly. These are not numbers that “real” authors would feel anything about (except shame), but for me they are amazing. Going four months without selling a single copy sets your standards pretty low, but I’m actually selling books. More than one a day. Of course I am curious what will happen over the long term, but I’m feeling good that at least I’m off to a good start.

For more, follow my blog for reviews and news about my writing, and consider signing up for my newsletter.

If you’d looked at the books section, or are on Instagram, you would have already seen it, but in case you haven’t, here is the new cover for Ugly, which will be out everywhere on June 7th: 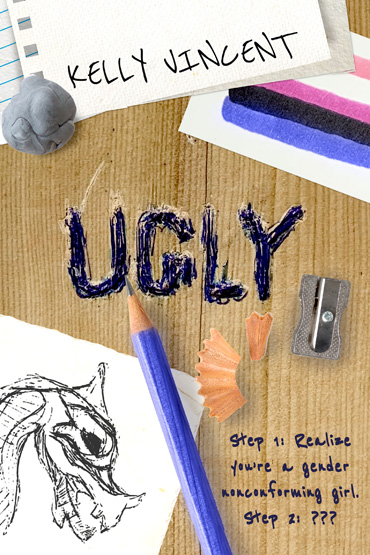 Today, I have Always the New Girl, Binding Off, and Ugly all loaded into Ingram Spark (the distributor for paperback, B&N, Kobo, and Apple), and I’ve uploaded files to Amazon for Kindle and Google Play directly. Although I’m still waiting for everything to be finalized and pushed out, I’m basically ready to go. The only thing that will change anything is if I get nice reviews from Kirkus for Always the New Girl or Ugly (I should have those both back by early this week). If that happens and there’s a good quote I can pull out of them, I will add them to the book cover and resubmit those.

My publicity campaign will begin in the last week of May, which I can’t believe is coming up so soon. The passage of time is relentless. But as soon as Ugly is released, I’ll have five books out (including one romance), which seems like a number that is easier to make some progress with. I’m actually not sure what I’m going to work on next in the YA fiction world. I’m actually focusing right now on my YA nonfiction book and on getting my two romances out, because they’re close to ready. Then I’m going to return to YA fiction and do something. Maybe work on Sadie Speaks, or maybe work on the sequel to Ugly, depending on how things go.

I have been in this weird really bad reading slump, where I’m not just reading slow, but I’m actually not reading at all, except when required. It’s weird and I think it has me a little unbalanced, but when I’m lying in bed at night, the silly games I play on my phone seem easier than reading. I’m still hoping to get back to reading like normal. But we’ll see. In the meantime, I apologize to anyone who likes reading my reviews.

I am still prepping for the upcoming releases. Always the New Girl and Binding Off (the prequel) are coming out May 10th, and Ugly June 7th. I have submitted both the novels for Kirkus reviews so I am hoping they are at least good enough to extract a quote from. If so, I will add them to the covers. I have final versions of the May book covers from my designer: 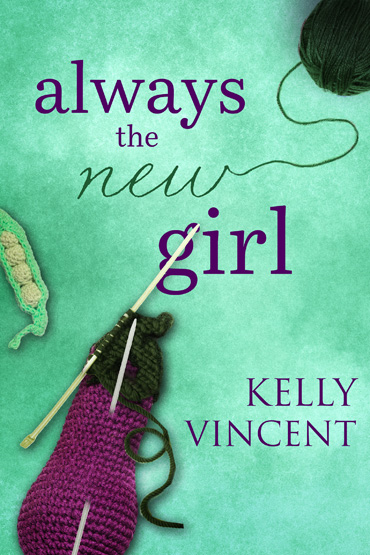 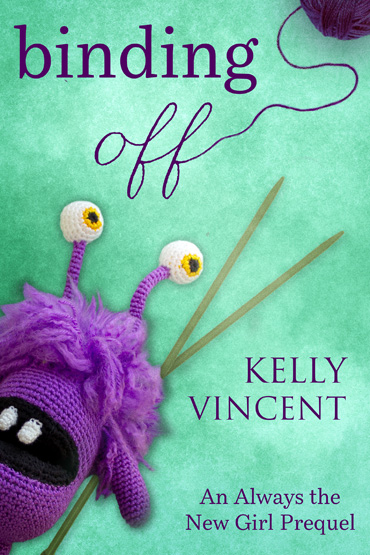 I love them, but I still need to finalize the paperbacks. I want to add the Kirkus quotes if possible (which aren’t due back to me until later this month), and I am getting help on the back cover book descriptions from a publicist I hired, so I need to update those. So I’m hoping that all comes together in time for the release. Worst case, the paperback versions are a little delayed.

My cover designer is also still working on the Ugly cover, but I should have that back well in time for release. More significantly, I’m going all in on this release, as I’ve hired a professional publicist this time. I’m spending quite a bit of money to see if I can find actual readers, something I’ve struggled so much with on Finding Frances. People seem to like that book, but I can’t get it in front of anybody. And I think it’s going to be even harder to find the audience for Ugly, since this one will appeal more to teens than adults (adults aren’t as interested in gender identity stories as (some) teens), which isn’t as true of all the others. So I’ve paid for extra marketing efforts, so the whole package includes reviews (obviously not guaranteed positive, but hopefully), BookBub ads, Amazon ads, some Amazon listing optimization, and other stuff I don’t remember. It may not work. I definitely won’t get my money back in earnings, but I’m hopeful I can at least reach more readers who will also be interested in my other books.

Other than the releases, I’m not currently working on any YA right now, which feels a little weird, but there you go. I’m busy with art school and am working on finishing up a couple romances under my pen name, and once I’ve got those done and released, I plan to get back to Sadie Speaks, or possibly (if sales go better than I expect), the sequel to Ugly. Or maybe both. My crystal ball isn’t working right now.

Finally, the social media strategy I talked about earlier is still going on, as I am posting pretty regularly on Instagram and TikTok (generally three times a week on both). I'm still locked out of Twitter, and I don’t see that ever resolving. My Medium article writing has suffered a bit was I definitely couldn’t keep up with my weekly plan, or even biweekly, but I’m doing the best I can given my pretty busy life at the moment.