So I know I posted last week after ages, so posting again one week later is a little odd… but I found out Finding Frances got another award, an Independent Publisher Book Award (an “IPPY”). This is another one with tons of categories, but it’s still nice to get some more recognition. Last year they had close to 5000 entries (I couldn’t find this year’s number). This time the book placed third (in another tie—what the heck is up with that?) in the Juvenile/Young Adult Fiction E-book category, which can be seen on this page.

On the heels of these wins, I felt emboldened enough to apply for another BookBub Featured Deal. And got a big fat rejection a couple days later. So I’ve signed up for another Bargain Booksy deal for June 26 (the ebook version will be on sale for 99 cents from June 25 through July 1, in case that is of interest to anyone... anyone?). Because I found out—and it’s a little embarrassing to write this, but whatever—I have not sold a single book in 2021. A couple books (maybe 3?) sold on Amazon, but apparently they had a few in stock, so not a single one has been purchased from the publisher (I did confirm this with them). No Kindle or other ebook, either. I knew this was going to be hard, but not this hard. Ugh.

Maybe if I can make some progress with the Sarah stories, starting with “Now Would Be Good,” on Kindle Vella, I’ll get some new readers for Finding Frances. I mean, it can’t make things any worse, as it’s not possible to have a negative number of readers. Also from the department of maybe-not-bad news: I heard from my developmental editor on this book that she started reading this past week, so I’m hoping she’s as fast as she’s been in the past, and I get it back in a week or two. I can get “Now Would Be Good” ready to post pretty quickly, as I’m not going to worry about sending it to a copy editor first since it’s been gone over so many times as part of my thesis and more. I am still going to send the whole book to a copy editor, so if they do find anything wrong with that story, I can always update the text later. The only thing that will slow me down is if my developmental editor suggests any major structural changes that impact that story (or anything that comes later but I need to set up there).

Random image: here’s a self-portrait I had to do for a class. My mom says it’s “frownier” than the photo I drew it from. Maybe I was subconsciously depicting how I feel about my less-than-stellar writing career? 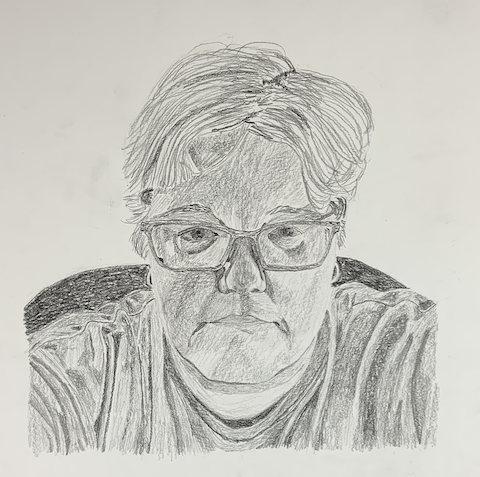