It’s been a little while since I bored you with an update about what’s going on with my writing.

I’m working away on the third book, whose working title is Ugly. This is the 80,000-word novel I wrote in 28 days in November for NaNoWriMo. I’m taking it through my writing group chapter by chapter and met with them yesterday to go over Chapter 3. I like it and feel like it’s going to end up being a pretty solid book, though it’s going to take a lot of work. The first draft is pretty rough, though there is definitely some good stuff in there.

Sadie Speaks is still currently being neglected as I don’t know what to do with it. It needs major work, but it feels like I need somebody else to tell me what to do with it. A couple of freelance editors have seen it, but they didn’t quite share my editorial vision so I didn’t really agree with their suggestions. So I’m going to have to figure it out on my own.

Finding Frances is still getting nowhere with agents and editors. It’s currently with one of each, but I pinged them both Monday because they’ve had it for 3 months. The editor got back to me to say she had received it and would only contact me if she was interested in more. The agent never responded. So I’m not exactly holding my breath on either of those. I’m pretty worn out with querying it and am not sure I’m going to summon the energy to try again.

In related news, I decided to do an MFA (Master of Fine Arts). I got accepted to both of the ones I applied to, but I decided to go with Oklahoma City University’s Red Earth MFA and its concentration in Young Adult Fiction. I’m pretty excited about this. It starts in July. It’s a low-residency model, which means twice a year I have to go there for an intensive 10-day residency, where there are craft talks, I’ll meet with my faculty mentor for the semester, and I can mingle with other students. Then for the rest of the semester, I’ll send packets of writing in to my mentor, who will send back feedback. I also have to read a lot of books, as some of the writing is critical annotations of genre books or responses to craft books. I have to attend a residency before each of my four semesters and then go to the one immediately after my last semester to wrap things up.

Finally, in unrelated news, I started a new job at work. I’m no longer a software developer and am now a data scientist (my actual job title is Analytics Analyst, which is hilarious, and not deeply meaningful). I will leave you with a picture of my favorite parking space at work: 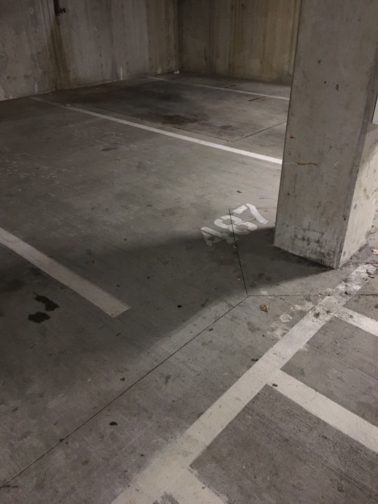