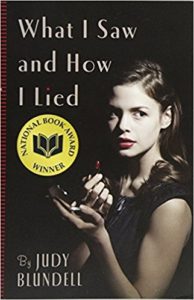 What I Saw and How I Lied is an interesting historical, set just after WW II. It features quietly bold 15-year-old Evie, whose mother is a bombshell while Evie herself is a bit plain. And she’s not happy about it. Her stepfather is a charming sort but when he gets frustrated by something, they take off in the car and head from Brooklyn to Palm Beach, Florida. There, Evie learns a lot of surprising and not-so-nice things about the world and her parents. She also meets a man who she falls for, despite the fact that he’s 8 years older. It eventually seems to her that pretty much everything she believed about her parents and their life together was a lie. Then she’s put in a position no one wants to be: she has to betray someone—but will it be her parents or the man she’s fallen in love with? And what about the truth—how important is that compared to family loyalty?

The story is told with a lot of foreshadowing. We know from the beginning that something bad has happened and that Evie is going back to tell us what, with references to the future spread throughout. For instance, in Chapter 1:

They knew who we were; they’d seen our pictures in the paper. We knew they’d be saying, Look at them eating toast—how can they be so heartless?

Now I had to look at it again. This time without me in it, wanting things to go my way.

Clearly, Evie imagines herself having grown up in the course of the book, which she definitely does.

But there’s this fantastic line that I think pretty much sums up being a teenager:

I was an adult now, just like her. But feeling grown up? I discovered something right then: It comes and goes. I was still afraid of my mom.

The fact that we know that Evie and her parents are considered guilty of something, even though we don’t know what, makes us pay special attention to them as the story unfolds. Neither is very likable to me and I enjoyed watching Evie’s perspective on her family change over time. Character development of all the major players is very good.

Blundell does a great job of capturing the atmosphere of post-war U.S. with great language and the mindset. As I mentioned, Evie is a little spunky in her way, even though she is a girl of her time. Here’s a line from poem she and her friend memorized:

Your virtue you must never squander

But Evie’s first thought is that her friend has seven siblings, so her mom was clearly squandering her virtue “all over the place.”

This isn’t a long book, but it wasn’t a fast read for me. It was more of a slow burn, which meant I savored the sense of foreboding all the more. For those interested in the horrible aspects of the past that Blundell explores in the book, she includes a short guide to finding out more. Finally, I should mention that the book won the National Book Award. Overall, I recommend it to anyone who likes mid-20th-century stories.