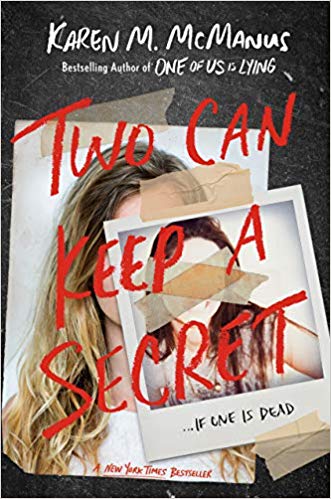 The book’s narrated by two characters: Ellery and Malcom. Ellery and her twin brother Ezra are moving in with their grandmother in Echo Ridge, Vermont while their mother is in rehab. Malcolm is the younger brother of the guy everyone thinks murdered a girl five years earlier.

Things go wrong for both of them right from the start. When Ellery and Ezra are getting a ride from the airport, they stumble across a body in the road at the edge of town. At a fundraiser for the murdered girl, Ellery finds Malcolm standing with a can of spray paint next to a message sprayed on a wall:

Murderland was the name of the Halloween park where the girl’s body was found. In its new incarnation, it’s called Fright Farm, and Ellery and Ezra get jobs there like most of the other teenagers in town. Ellery also becomes acquainted with the queen bee of the school, Katrin. When meeting her, she thinks,

We all murmur hellos, and it feels like some sort of uncomfortable audition.

Who can’t relate to that? Soon, Ellery’s been sucked under the threat implied by the graffiti Malcolm might have written. But she doesn’t think so. And it’s not long before she’s hanging out with him as well as her brother and Malcom’s friend Mia.

In addition to being the shoe-in for homecoming queen, Katrin is also Malcolm’s step-sister. Malcolm isn’t overly fond of this situation, but there’s not much he can do about it. Plus, he’s got more to worry about: his infamous brother is back in town, and he doesn’t know why or what he’s doing there. The timing is bad with the graffiti, more of which appears later.

With this set up, there are quite a few suspects as well as a real threat against Ellery. I wasn’t blind-sided by the resolution, but there is a small but significant twist at the end that I didn’t at all expect. Additionally, there are several minor twists and reveals along the way that surprised me.

If you enjoyed One of Us Is Lying, or YA suspense in general, you’d probably like this one, too.