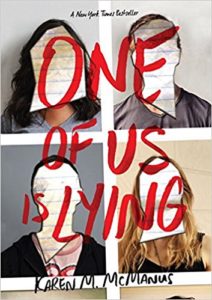 This is quite a book, very addictive. It’s a debut, too, which makes it extra surprising, because it feels a little masterful. It’s a tricky psychological thriller with four unreliable narrators. Actually, I’m not sure if the label “psychological thriller” quite fits because it’s not particularly intense like you’d expect with a thriller. Although the book messes with your head, it’s a little mellow compared to Gillian Flynn’s books and The Girl on the Train, I think because there’s more of a sense of danger in those than in One of Us Is Lying. In this book, the mystery is at the forefront. Who killed Simon and how are they hiding that from us despite the fact that we’re in their heads?

Simon has a regularly-updated gossip app that publishes humiliating secrets of the kids at school. When he ends up in detention with four other kids and then ends up dead during that detention due to a well-known peanut allergy, it’s pretty clear that one of them must have poisoned his drink (with a particularly potent type of peanut oil). Bronwyn is the perfect academically-inclined girl; Nate is the delinquent everyone knows sells drugs on the side; Addy is the somewhat personality-less girlfriend of a football star; and Cooper is a baseball star in his own right.

The strange thing is that someone obviously engineered it so that all five kids ended up in detention for the same reason—a cell phone planted in their bags during a class with a rabid cell-phone-hating Luddite teacher, Mr. Avery. So we are pretty sure that at least some of the kids have been set up. But with the way things went down, it seems unlikely that at least one of them didn’t put the oil in the cup Simon ended up using.

The police think this, too. When it comes to light that Simon was about to publish a post that would out some damning secrets (whether true or untrue) of the four remaining kids, they become strong suspects and (as it appears as the story unfolds), the only ones. Which is admittedly odd because Simon had humiliated plenty of other kids along the way, any of whom might have framed the four.

The writing is great, with fantastic and realistic dialogue. Bronwyn, Nate, Addy, and Cooper are all wonderfully complex. Bronwyn is so driven that she’s actually done a stupid, reckless thing that could destroy her chances of going to her dream school. She seems the least complicated of them all. Nate is a delinquent, yes, and he’s a playboy, but he’s got a nasty home life and still doesn’t seem like a killer. Addy has let herself be metaphorically absorbed into her boyfriend. So when something messes that up, she’s got to dig deep to redefine herself. Finally, Cooper is a very talented baseball pitcher likely to go pro after graduation. But the question is, is he on steroids? And what’s his other secret? We’re not sure. Even the secondary characters—especially Bronwyn’s and Addy’s sisters—are also interesting. There are layers to the book, too, with multiple engaging subplots.

Really, you should go read this one now if you like good books.