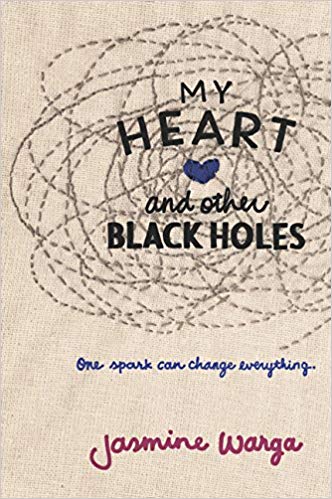 This is a quiet book about depression and how it can seemingly take over a person’s life and entire perspective, and then how to get away from it.

Aysel suffers from depression, which she imagines is embodied as the “black slug” in her stomach. She also worries that the apparent mental problem that caused her father to murder someone might also live inside her. The only solution she sees is to kill herself, so she searches the internet for a suicide partner. Finding one close by in a boy named Roman, the two of them come up with a plan—a date, place, and method. The rest of the novel focuses on their growing relationship and how it changes Aysel.

Aysel’s a different kind of character. She’s still into classical music, like her dad taught her to be, even though she thinks she might hate her dad after what he did. She’s also a bit of a physics nerd. She isn’t close to her family, mostly because she thinks of herself as fundamentally different from them, even though she lives with her mom, stepdad, and half-siblings. She also feel different from everyone around her, partially because she’s Turkish (her parents came over to the US from Turkey), but also because she doesn’t know how to connect with other people. She’s clearly damaged and her depression has taken over. Roman’s also damaged, but his comes from a single act of negligence on his part that resulted in a tragedy. He can’t live with himself even though it wasn’t really his fault.

Warga handles Aysel and her depression without making the book itself to depressing. There are even some light moments. This made me laugh:

I don’t admire many things about Stacy, but I have to admit it takes some ovaries to talk to your physics teacher like he’s a puppy.

In general, Aysel’s voice is very believable. She comes across as a little younger than a lot of sixteen-year-old protagonists out there, but I think it fits because of her social isolation and inexperience with relationships.

My Heart and Other Black Holes provides a good look into the mindset of a suicidal person, so it could easily be used both to be related to and to be a teaching tool.