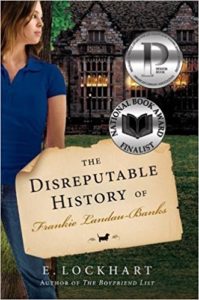 Frankie’s such a great character. She’s so 15—new to many things and trying to navigate a world with changing expectations. And she’s smart and notices things (regarding a party she was excited to be invited to, and frustrated to be ignored at: “The party was boring. It was people standing around in the cold.”), even though she doesn’t generally over-analyze. She is going into her sophomore year at an elite boarding school with a new, woman-ified body after spending her freshman year as an awkward girl (over the summer, she “gained four inches and twenty pounds, all in the right places”). And a feminism-inspired sense of right and wrong is blossoming within her, as well, partially because of her Berkeley-bound feminist sister and partially because it’s just who she really is. The last point is the best part to me. She’s not willing to accept the status quo when it’s not fair.

She is ecstatic when she manages to bag a popular and very good-looking boyfriend (Matthew) she’d lusted after all freshman year. She is genuinely happy and really does like him. But things aren’t perfect.

Frankie remembered how Matthew had called her a ‘pretty package,’ how he’d called her mind little, how he’d told her not to change—as if he had some power over her.

She was annoyed by this, but:

most of her simply felt happy that he had put his arm around her and told her he thought she was pretty.

Everyone can get that—the desire to be appealing and loved is so strong in all of us, and women and girls are used to having to sacrifice something to get it. But there is a niggling doubt in Frankie’s mind, which makes her different from most girls, according to the author:

Lots of girls … are so focused on their boyfriends that they don’t remember they had a life at all before their romances, so they don’t necessarily become upset that the boyfriend isn’t interested [in their lives].

Frankie’s sister is the voice of wisdom who calls out the reservations Frankie’s feeling. When Matthew gives her his old Superman t-shirt, Frankie’s touched. But according to her sister, Zada, “‘Nah, it’s like a dog peeing on a hydrant. He’s marking you with his scent.” Frankie doesn’t accept this, but the sentiment stays with her. Later, it becomes clearer what bothers her:

Matthew had called her harmless. Harmless. And being with him made Frankie feel squashed into a box—a box where she was expected to be sweet and sensitive (but not oversensitive); a box for young and pretty girls who were not as bright and powerful as their boyfriends. A box for people who were not forces to be reckoned with.

All this doubt and frustration manifests in Frankie as a desire for a little power of her own. She comes up with an ingenious plan to undermine some of the “old boy” power that Matthew and his friends yield. Her sister doesn’t think it’s necessary. She says:

‘Are you seriously going to tell me you buy into the patriarchal notion that power is localized in institutions created years and years ago by people who were overly proud of themselves for having the male set of genitalia, and most of whom are either dead or drooling over themselves in nursing homes by this point?’

And then she continues when Frankie doesn’t have a good answer:

‘Please, that is so antiquated. The institutions of male supremacy only have real power over you if you buy into that notion. Go found your own club and tell them they can’t join. Or better yet, drop the idea of clubs altogether because they’re exclusionary, and embrace some other, more flexible way of connecting with people.’

I love Zada, though I don’t necessarily agree with her. Still, it’s what drove Frankie to undertake a campaign to earn the respect of Matthew and others. I won’t go into what she does, but it is clever and entertaining.

The voice of this novel is wonderful. It’s a little snarkier than Frankie herself is but somehow it absolutely fits her story. It’s quite funny at times and I was really curious about where Frankie’s antics would take the club once she wielded her power over them. And Frankie’s whole idea of “neglected positives” and “inpeas” is awesome and it’s so funny when she uses them throughout. Take prefixes off words that feel like they’re negating something, and assume it’s a positive instead of a negative. Sometimes these are real words that just aren’t used as much as the negative form (“gruntled” from “disgruntled” (a back-formation)), or they’re really words that mean something other than the positive (“criminate” from “incriminate”, which mean the same thing), or they’re just not words at all (inpeas).  and so on.

This is a solidly feminist book that really delves deep into the ideas without feeling preachy. Everything is expressed as real feelings Frankie’s having in response to real events. It’s really about a girl choosing to navigate her own path while staying true to herself and learning who she really is, without defining herself by the people she associates with. After all, as one of the characters asks,

‘Who wants to be the guy on the path?’

Frankie didn’t—but she didn’t want to be the guy whose idea of off-roading was an SUV purchase or a shortcut across the grass, either.

That really sums up the novel.