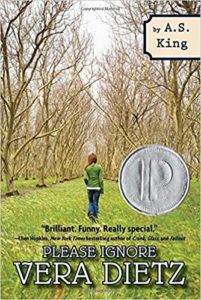 I listened to the audiobook version of A.S. King’s Ask the Passengers and a friend recommended another of her books, so when I was at Powell’s* when I was in Portland (Oregon) last weekend and spotted this book, I picked it up.

Like Ask the Passengers, this book has a little bit of magic in it, but it’s still solidly contemporary in my mind. It features Vera Dietz, an 18-year-old high school senior who also delivers pizza full-time because her dad thinks it’s good for her. First, I have to mention that the details about pizza delivery are spot-on. I “drove pizzas” for about 6 years, so I’d know if the author hadn’t done it herself or at least done her research.

The book is a little interesting in structure and in the way the story unfolds. Although the story is clearly Vera’s, we also get short chapters in other POV’s (Vera’s dad, her dead friend Charlie, even the town’s landmark pagoda) and the current story chapters are interspersed with the history of Vera and Charlie’s friendship. Then, King takes the idea that you should reveal to your reader only what they really need to know to an extreme (but not too far). Charlie is dead before the book starts, and we know very little about it other than something is up with his death. We also know that although they had been best friends for almost their whole lives, they’d had a falling-out not long before he died. We find out about a third of the way in that Charlie supposedly did something terrible before he died, but we don’t even find out what that is until about the 80% mark. King’s great at keeping the reader interested but not (quite) frustrated.

The story is really about Vera coming to terms with her family life and forgiving her best friend for A) betraying her, and B) then dying. She’s literally haunted by her knowledge of what actually happened to/with Charlie at the end, seeing thousands of ghosts of him at a time. The mystery of it comes together fairly quickly at the end.

Some people have mentioned that they thought this book was funny. I didn’t really find it so funny, because somehow I just took everything seriously, though there were definitely moments that made me laugh. There’s an ongoing joke about Charlie being a pickle (since “now he’s a series of molecules”) and some of the situations Vera finds herself in are ridiculous.

King is a great writer. The writing itself is very good—good dialogue, evocative descriptions, etc. Also Vera’s one of the most well-drawn characters I’ve read. She’s eighteen but still feels very much like a semi-lost but still college-bound teenager who lives at home, which she is. And Charlie—wow. He’s so unusual and not very appealing to me, but I had no question about what drew Vera to him, and even though he was deeply flawed, I did like him. The other characters in the book are also very believable and real. Her dad is frustrating and weird, but also such a dad. None of the other characters really gets a deep treatment (James, her older sort-of-boyfriend, and Jenny, Charlie’s girlfriend), but they both feel very three-dimensional, anyway.

Overall, it’s a very engrossing book that I’d recommend to anyone looking for something unusual to read.

* If you’re ever in Portland, you absolutely must go to Powell’s, a massive bookstore that is several stories and takes up an entire city block. They have over a million books.