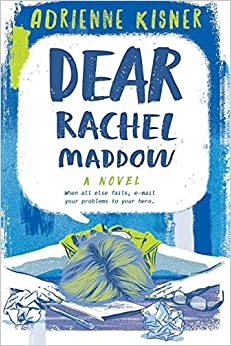 This is a book I picked up for one of my reading challenges, but I was looking forward to it even though I’m not a huge fan of epistolary novels. But I like Rachel Maddow and she always reminds me of an old friend, so I figured it would be a good read.

Brynn has become an under-achieving student since her older brother died and left her alone with her weak-willed mother and horrible stepfather. On top of that, she was dumped by her girlfriend over the summer. She’s in remedial classes despite being smart and eloquent because she can’t muster the will to do anything better. The one thing she loved was being on the school paper, but she was kicked off when her GPA slipped too low. She wants back on the paper, but not quite enough to do anything about it. When something happens at school that finally gets her riled up enough to do something, she surprises everyone—but she surprises herself the most.

There are a lot of great characters in the book, some good, some bad. Brynn’s ex-girlfriend Sarah is stuck-up, her tutor Lacey is a great friend (and in a wheelchair), Justin from the paper wants her to figure out how to come back, Michaela the hot new girl has a secret past, and Adam is the school’s resident nasty and entitled future politician. Her mom and stepfather are easy to dislike and her new older friends are easy to like, even if they don’t feature in the story too much.

You might wonder where Rachel Maddow fits in. Brynn watches the show every night since getting started with Sarah, and she admires Rachel. Brynn writes to Rachel for an English assignment and when she gets a response, her teacher encourages her to write back. Instead she starts writing Rachel long emails, saving them all in her drafts folder rather than sending them. Some of them also get turned in as assignments, and her teacher’s comments are hilarious. The book is entirely told through Brynn’s emails, with a few emails from other people thrown in to liven up the mix.

I mentioned that I don’t generally love epistolary novels, but I feel like this one worked. It was basically just a first person novel with a slight frame around it. Brynn’s emails are clear and full of details that tell the real story from her perspective. And although I was never super-into student government (too cynical), it’s interesting to see Brynn navigate that world. Brynn’s voice is great—funny and snarky, but not too much.

Overall, I think a lot of people will like this one. It’s got a heroine that seems to be stuck getting herself unstuck, and a sweet romance.