I don’t have much to report about my writing. I did sell a couple copies of Finding Frances in June, and one in July. It’s pitiful that this is exciting, but there you go.

The final semester of my MFA has officially started. The main work is preparing my thesis, but I have that almost done. My mentor has the full creative thesis now and will be giving me feedback on it, and I have a few little tweaks to make to the critical part of it, and then I’ll submit that to her later this month. I’m also taking two classes in addition to the thesis. One is on suspense and thriller novels with Lou Berney (author of The Long and Faraway Gone, one of my favorite such novels). He’s got me reading a handful of novels for the first packet and then writing a short paper about what suspense is, and then for the second packet he’ll read a synopsis of my rewritten Sadie Speaks, and then pages from the novel for the two later packets. The other class I’m taking is on research for writing, with Jeanetta Calhoun Mish, who’s Oklahoma’s Poet Laureate. I’m researching Irish history now, because I’m thinking of writing stories set in Ireland in various points in history, since I spent so much time and effort delving into it in college. I don’t know if I’ll ever really write it, but if I want to, I’ll have all my research ready.

Other than working on that, I’ve been drawing more. Here’s an oil lamp I did in stippling (which I will probably never do again—tedious) and a mannequin I did using hatching. 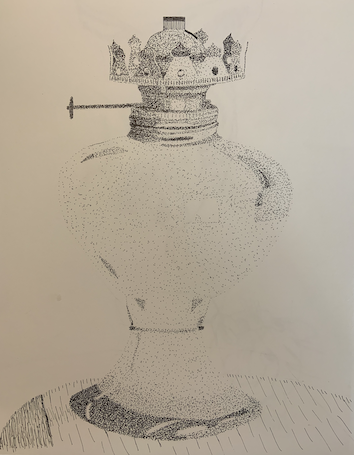 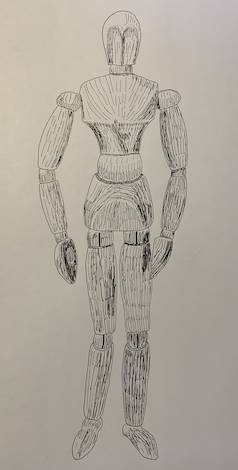 I’ve also started studying math again, because I’m planning to start the stats degree back up next fall, because I need that much time to study. It’s amazing how much you can forget when you don’t use it… I'm using Khan Academy as a starting point, which is pretty amazing. I'm guessing it's getting a lot of usage during the pandemic.

The only other thing going on is that I’m getting some work done in my bonus room, the room over the garage. It has a slanted ceiling but is otherwise a decent-sized room, and I’m getting bookshelves installed on the long, tall wall, along with a closet built at the end of the wall. The idea is to make it count as a bedroom. I’m not sure it will work, but I am sure I will have a lot more bookshelf space to store my many boxes of books. They’re starting the work tomorrow, and I’ll post pictures once it’s done. For your amusement, I’ll post a terrible but related poem I had to write for my residency (the assignment was to write a ghazal, which is an old Arabic poetry form—I didn’t do it quite right, but I got most of the elements right (writing about a desire with lots of repeating words and naming yourself near the end)).

They overflow from shelves and boxes. Books for me.
On tables and cabinets. History, math, linguistics for me.

Fiction, lots of fiction, of all different types.
Boxes of books, as far as the eye can see, for me.

They’ve come shipped from all over the world.
From Glasgow, Edinburgh, Pilsen, Milton Keynes, for me.

Even some from the Isle of Skye, in Gaelic.
The cats nestle amongst them, I read for me.

But they’re everywhere, too everywhere.
A place for them is what I need, for me.

A call to my contractor
And he’ll do some measuring for me.

A little bit of work in SketchUp
And they’ll be a virtual drawing for me.

A couple of weeks of sawing and hammering
So they can fit on the shelves neatly, for me.

Then you can call me keeper of books.
Shelves of books, as far as the eye can see, for me.