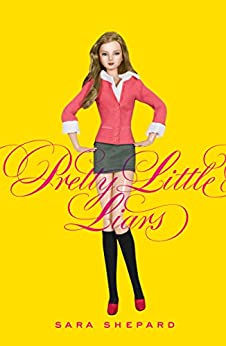 I know this book came out a while ago (2006) and is a TV show now, but I picked it up based on a recommendation for my suspense/thriller class for my MFA. I’d obviously heard of it, but never read it.

The book opens with the disappearance of Ali, who’s friends with Emily, Hanna, Spencer, and Aria, during the summer between their seventh and eighth grade years. Three years later, the four remaining girls have grown far apart, each having their own circle of friends. But they also each hold some secret that Ali also knew, and they still worry that the secret will get out somehow. But they’re all especially nervous when they start getting creepy text messages and emails from someone who appears to know all their secrets—current and past—the same way that Ali did. It doesn’t help that the person sending the messages is signing them —A.

There’s of course more going on than these mysterious messages. Emily has lost interest in swimming (the thing everyone in her family does) and her boyfriend, and has found a surprising interest in a girl who’s just moved to town, Maya. Hanna wants to be perfect but keeps getting herself in trouble through not-the-best choices. Spencer has a huge crush on her sister’s boyfriend and Aria has a crush on her new high school English teacher—and neither appears to be unrequited.

Although the book was interesting, I had a little trouble connecting to these ostensibly perfect, beautiful girls. But this is a novel you read for the secrets, really. Still, I have to admit that the book felt incomplete to me. There isn’t really a resolution to the main question, and you’re obviously supposed to read the following books to get that answer. This annoyed me.

But if you like long series, suspense, and tales of high school girls—and haven’t read this already—you might enjoy finding a new series (17 books!) to read.