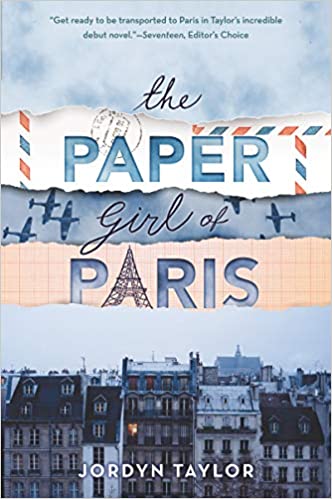 I haven’t been a big reader of historical fiction, even though when I do read it, I usually enjoy it. But I recently read another one I really liked, so I picked up a couple when I went to Barnes and Noble recently.

One was The Paper Girl of Paris, which I devoured in only two days, which is unheard of for me in the last year and a half. My reading slump has had me taking two plus weeks to finish a book for a long time. Not only did I finish this book in two days, but it never even made it upstairs to my bed, where I do most of my reading. Instead, I read it between doing other things at my desk in front of my computers.

So you can infer that I loved it. It’s actually a dual timeline story, where we switch back and forth between modern-day Paris with Alice and WW II-era Paris with Adalyn, Alice’s great aunt she never knew existed. The setup is pretty simple: Alice’s beloved grandmother has died and left her family’s Paris apartment to her. Alice’s mom, whose mom is the grandma in question, suffers from depression and has been distraught since her mom died and she found out about the apartment, which she had no idea existed.

The Apartment and the Discovery

Alice goes with her parents to check out the apartment. They are all confused about everything, but Alice is more curious and discovers a diary belonging to Adalyn, who she learns was her grandma’s sister. It’s of course strange that the grandma never told anyone about her family, but it’s also clear nobody really thought about it before.

Alice takes the diary and starts reading it, loving the information about her grandma that Adalyn shares, because it’s clear they were really close and loved each other. Which makes it even stranger that Alice’s grandma never mentioned her. But she gets a clue on going back to the apartment, when she finds a picture of Adalyn cavorting with Germans during the occupation, so she’s horrified, because from the diary, it sounds like both she and Chloe were passionately opposed to the Germans and their many atrocities. So Alice doesn’t understand how she could change her mind.

So we see Alice starting to explore the diary, which she has to painstakingly type into Google Translate. In the process of spending time away from her parents, she befriends a local boy named Paul who helps her research things. Interspersed with these chapters are full chapters from Adalyn’s point of view. This is the part of the book I loved.

I’m going to admit that as soon as Alice found the photo of Adalyn with Nazis, I knew what it actually meant, even though it takes Alice a good part of the book to figure it out (the advantage of having more life experience). But Adalyn is one of the people I love reading about—the people who actually did the right thing during the war.

So even though I knew that little twist (I think most readers would figure it out pretty early, but I’m not entirely sure), there were still some surprises that I enjoyed. One has to do with a museum where Alice ends up being able to give some clarity on a photo the museum had but knew very little about.

Obviously I totally recommend this book. If you aren’t a big historical fiction reader, this one might be more palatable since half of it takes place today. But Adalyn’s story is what made the book for me, even though I liked Alice and her story just fine.