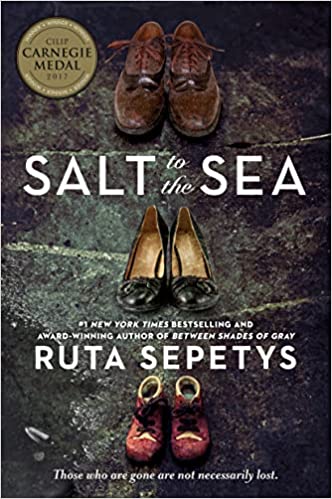 I’ve been on a bit of a historical kick in my YA. This one has been on my shelf a while so I picked it up because I loved Out of the Easy by the same author.

This book is set during World War II in East Prussia, a little pocket area between Lithuania and Poland on the Baltic Sea. It’s got four viewpoint characters, all young people—teenagers or maybe a couple in their very early 20’s. There are some other characters in the book who are older, but it doesn’t detract from the sense that this is a story about young people.

The premise is that there is a group of people walking to a port city to try to board a ship and get out of East Prussia, which is being torn apart by the war, pinched between the Russians and the Germans. It’s definitely a ragtag group, but from a story perspective, it’s a great mix of characters.

Joana is a young, trained nurse; Emilia is a deeply traumatized fifteen-year-old; Florian is on a somewhat noble journey to try to make up for some Nazi evil he inadvertently aided; and Alfred is spineless German soldier with a personality disorder.

The book cycles rapidly through the different characters with very short chapters, usually not more than 2-4 pages. I actually had a little bit of trouble getting into it because I don’t usually read multiple-viewpoint novels, and I found the switching jarring. But I got used to it because I really liked three of the viewpoint characters and I wanted to learn more about them. The fourth viewpoint character is supposed to be despicable, and he absolutely was. However, once I’d gotten used to it, the multiple POVs was cool because you got to see how the characters viewed each other versus what was really going through the others’ heads.

So I think anybody reading this story is probably going to guess the basic outcome. I didn’t recognize the name of the ship they were trying to get to, and after reading the author’s note, I wonder how the name isn’t more known, given the almost incomprehensible scale of the tragedy.

This is a truly sad story, as any war story must be, but it does such an incredible job capturing what war is like for regular people. You can’t read this and not appreciate how much general suffering there is during war when it’s your homeland that is occupied or serving as the battlefield. Sepetys is a master of the historical novel in my view, based only on the two I’ve read. She skillfully conveys the harsh historical realities her characters are facing and still finds ways to show bravery and the power of the human spirit. I can’t wait to read her others.