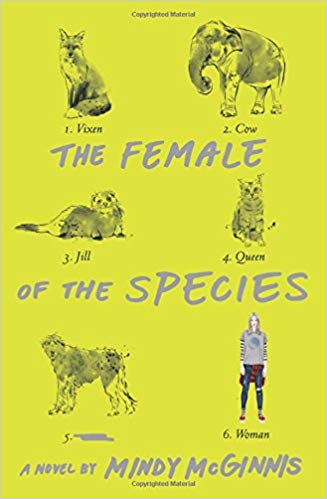 The first thing I have to say is that this is an unusual book. It’s about violence and rape culture, which means it’s wasn’t easy to read. But it felt worth reading.

We know from the beginning that Alex Craft has killed someone in the past. Over time we learn that the way she did it was pretty brutal. But we also understand why she did it—the guy got away with raping and murdering her older sister, Anna. And this has us pondering violence in general. This is good since Alex’s brain is slightly fixated on her own penchant for violence, which she worries could emerge again at any time. In the meantime, she’s just trying to just make it through the day-to-day of school and a life in a dark home. This is difficult, as she’s not like other kids and she knows it.

Rape comes up more explicitly at a strange assembly at school early in the book, where a cop comes in and starts listing off stats about rape, even pointing out specific girls to exemplify the numbers. This scene definitely sets the expectation that rape culture will be an important theme, even though there’s no real way to know which girls will be impacted.

Besides Alex, the book features two other protagonists: Peekay (P.K., the preacher’s kid) and Jack (the local popular over-achiever). Both Peekay and Jack know who Alex is, but they don’t know her at all. No one does. Peekay and Alex meet when they both start volunteering at the local animal shelter as part of their senior year experience, and Jack and Alex meet when they’re called into the office to discuss the valedictorian status that they’re competing for, even though Alex doesn’t care about it since she has no plans for college. Both Peekay and and Jack are good characters who are as different from each other as they are from Alex.

With this setup, I wondered where the story would go. Alex gets to know both Peekay and Jack, getting pulled into the ”normal” teenage social world of parties etc. She and Peekay become friends and even though Peekay’s good friend is really leery of Alex, Peekay’s convinced she’s a good person—because she’s got a clear soft spot for animals. Alex and Jack eventually get together. Jack’s historically gotten around quite a bit and has an on and off thing with the town’s unofficial beauty queen, Branley. But he fixates on Alex in a way that surprises him, but not as much as Alex’s feelings for him surprise her.

An event at a party brings both rape culture and Alex’s violence to the forefront and we wonder what is going to come after. Peekay and Jack get to know Alex better, but not as well as they think. And when Jack finally learns a dark secret about Alex, he doesn’t know what to do and ends up looking like the bad guy. The eventual climax of the story surprised me. Again, both rape and violence feature significantly, but the events themselves do not go as I would have expected. The resolution was satisfying enough, the character’s lives being changed in important ways, but still left me feeling a little unsure.

Speaking of characters, this is an area where the book definitely excels. Alex is probably the most unique character I’ve encountered. She’s complicated and not necessarily morally admirable. She made me really uncomfortable at times, which was sort of awesome. Peekay is also great. She was my favorite, actually. She too doesn’t always behave the way she feels like she should, though she doesn’t really feel bad about it. And she brings Alex out of her shell, something that seems impossible at the beginning. Jack is also a good character (even though I never really liked him too much) because he’s complex and just so human, flaws and all. He’s pretty self-aware, too, which made him interesting. The secondary characters are also compelling—specifically Branley and Peekay’s friend Sarah.

This book definitely isn’t for everyone, but if you like to see rape culture challenged and violence pondered in a feminist way, check it out.