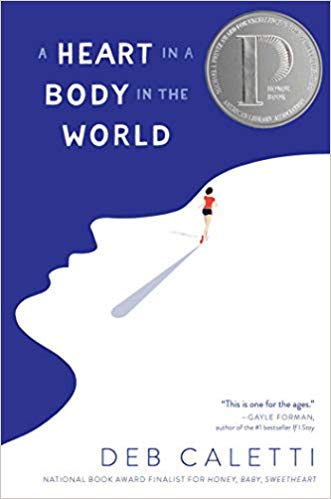 I admit I’m a fan of Caletti, even though I haven’t yet read all of her books yet (I’m at about half). I love how she writes about mental health issues without making the stories issue books. So I was predisposed to like this one. Which was fine, because I did. I should mention that I listened to the audio book rather than read the paper book.

The book takes an interesting approach to revealing a major incident that took place before it starts. We know something happened and that it had a huge impact on Annabelle, a teen at the beginning of her senior year. But Caletti holds back, only delivering tiny bits of info at a time, waiting until very close to the end to really reveal the full event. I feel like it might annoy impatient people because so much isn’t known (and because of that it feels slow in the beginning), but I liked it because it kept my curiosity up. And as much as I guessed about the event itself, I was still a surprised by the details.

The basic story is that Annabelle spontaneously begins a run across the country, from Seattle to Washington, DC. At first, she is woefully unprepared, but soon her grandfather appears in his RV to provide support and a place to stay each night. Her younger brother Malcolm and two of her friends back home form a publicity team, setting up a fundraising page to help pay for expenses. She becomes a bit of an activist, against her wishes, because of what her journey represents to other people.

And this is an arduous journey for Annabelle for a variety of reasons. There’s the obvious physical challenge. Even though she’s already a skilled runner, the distance starts to take a toll on her body, with horrible blisters, sore knees, and painful chafing (and more). But it also means that Annabelle is totally stuck in her head with nothing but her thoughts. And those thoughts are themselves painful, because she thinks what happened was her fault. Since we don’t know what happened (we only know early on that her best friend Kat is “gone,” presumably dead). The one who committed the evil is a boy at her school she calls The Taker.

Structurally, the book is mostly told in flashbacks because the running basically provides a frame for her to relay her memories of The Taker and her friends to us. But I think it works well because what else would you do while running other than dwell on the things that stress you out? I mean, that’s not the healthiest thing to do, but it’s pretty human.

This book touches on some really important issues. I won’t name them all, but I love how Caletti is quietly feminist in this book. Annabelle consistently thinks about how wrong the treatment of girls and women is in our society without getting in your face about it (not that in-your-face feminism is a bad thing, but it’s definitely not for everyone). And it looks at guilt, PTSD,  violence, and self-punishment (that’s what her running really is). It also explores the idea that maybe if you’d made different decisions in the past, things might have turned out differently—but that doesn’t make you responsible for the actions of other people.

Overall, I think this is an important and deep book that a lot of people will appreciate. It is quiet, as I’ve implied, rather than being full of action so you might want to make sure you’re in the mood for that kind of book before picking it up. But I think it will be worth it.