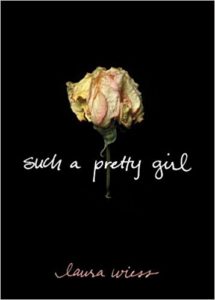 Such a Pretty Girl isn’t a long book, but it packs a lot in a little package. The back cover copy makes it sound like a dark and disturbing story—fifteen-year-old Meredith’s father is being released from prison after serving just three years of his eight-year sentence—and it is a dark and disturbing tale. Her father’s coming home, putting her in great danger. We don’t know exactly why, but we get a sense that something is very wrong. (Actually, kudos to the back cover-writer, because it actually really triggers your curiosity without revealing much, all while managing to remain wholly true to the book.)

Meredith’s father went to prison for abusing several boys in the neighborhood, and everyone hates her for it. She’s a pariah. But it’s even worse than that, because he also assaulted her. And she knows she’s not going to be safe when he returns.

Now, technically, he isn’t moving back into Meredith’s apartment with her and her mom. Because he’s not supposed to be alone with Meredith. No, but he’s got an apartment in the same complex. Officially, he’s reformed and being let out for that and good behavior. But she’s not a naive twelve-year-old anymore and she knows he’s going to come after her again. After all, there were no kids in his prison, so of course he behaved.

Meredith’s mom is a serious piece of work. She is infatuated with Meredith’s father, who she’s been with since she was twelve and he was sixteen. She is basically an overgrown child herself, unwilling to share him. It’s hard to tell if she simply doesn’t believe what he did to Meredith or if she’s only jealous. She doesn’t take the law seriously, either—Meredith’s father is over at their apartment all the time, and she leaves him there while Meredith is home. When Meredith confronts her about this, her response is the classy, “You won’t let it go, will you?” Some people might find it hard to believe a mom could be like this, but it’s realistic—there really are women out there like that. I went to school with a girl who had a mom like that.

One of the obvious questions is, why doesn’t the law do more to protect Meredith? Well, this is one of the problems with the law, really. It’s pretty rubbish at protecting people. People don’t get arrested just for having the potential for violence (which is right, of course). But sometimes the threat of violence is so great that you really do know it’s inevitable, yet still nothing can be done. In Meredith’s case, her mother definitely could do more to protect her, but she is so addicted to him that she doesn’t care. And definitely the people responsible for the conditions of his release could have made them far more restrictive, but the authorities aren’t always on the victim’s side. For instance, a woman with the Iowa Coalition Against Domestic Violence told me about a case where a man drove over his wife’s legs with the car—he was trying to kill her but missed. What happened to him? He was offered and plead guilty to driving with a revoked license. That was it. So although it’s unlikely Meredith would have been left so completely unprotected, it is feasible.

Fortunately, Meredith does have some allies in the complex. One is her boyfriend, Andy, and the other is a former cop (the one who arrested her father) named Nigel. Andy was one of Meredith’s father’s early victims, and his mother is out to get him for it. Andy wants to help protect her from her father, but he has his own life to live and sort of abandons her right after her father arrives. Nigel helps her figure out her options. She also has a grandma in town, but she’s not exactly aggressive in trying to ensure Meredith’s protected. It’s a little odd that she doesn’t try harder, but again, totally feasible. Not all families are functional.

In the end, Meredith solves the problem herself. The book wasn’t exactly a joy to read, but it was very satisfying to watch a girl deal with a bad situation. After you finish it, you will want to wash your hands. The subject matter is icky.