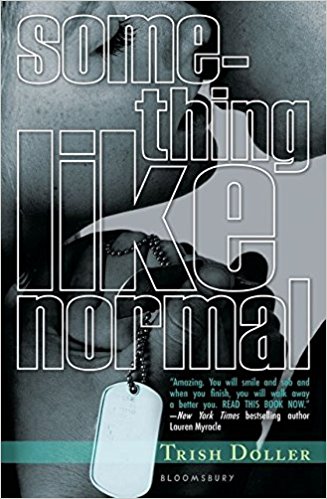 Something Like Normal is a slim book that explores a few weeks in the life of Travis Stephenson, a 19-year-old Marine home on leave after a tour in Afghanistan. His best friend there was recently killed and Travis is having apparent PTSD symptoms even though it’s undiagnosed because he’s afraid to seek help. He has nightmares and keeps thinking he’s seeing his dead friend. This definitely makes for a good story. And I did enjoy it, even though there were some things that bugged me about it.

Travis’s father is a jerk who has never forgiven Travis for giving up football. Travis’s brother Ryan sort of stole his “girlfriend” (I’ll get to the reason for the quotes), Paige, after Travis left for basic training and co-opted his car as well. His mom turned into a super-supportive military mom and his father didn’t take well to being ignored, so their marriage is struggling. So Travis comes home to a bit of a mess.

He goes to a party with Ryan and ends up at a bar where he encounters Harper Gray, a girl who wronged back in middle school. Somehow a little fib he told took on a life of its own and Harper ended up with a reputation as the town slut.

This is where one of my issues comes in. The good girl/bad girl thing was definitely in this book. Because Harper, despite her reputation, was really a good girl (i.e. a virgin) and Paige was really the one who slept around a lot (that’s why Travis thought of her only loosely as his girlfriend). And there were some other girls who were also considered sluts by the guys in the book in a way that might be realistic but was still frustrating. I wanted to see Travis come to realize his role in the perception of the girls and he never did.

Anyway, Travis runs into Harper at a bar and she goes off on him when he tries to flirt with her and punches him. That seems to be all she needs to do to get her five years of anger and resentment out of her system, which is the other thing that bugged me. Suddenly, she seems interested in him. I didn’t understand why, and I think the story would have been better if Travis had to struggle more to win her over.

Having said that, when I ignored how easy it was to get Harper on his side, I did enjoy the rest of the story. Travis does seem to change a little, and he comes to terms with the impact his friend’s death has had on him. He is a better guy by the end. Harper could definitely have been developed more than she was, but she was still a good character. The other secondary characters were a tiny bit flat. The best was Travis’s mom, who makes a major decision with his support. His friends aren’t bad as characters, though they are a little stereotypical (but to be fair, I imagine groups of Marines probably frequently are like that).

Overall, it was a good book, with those caveats I mentioned above. It’s nice to read a male protagonist. And Doller is a good writer. She gets into Travis’s mind effectively, the dialogue is realistic, and the story is well-plotted.