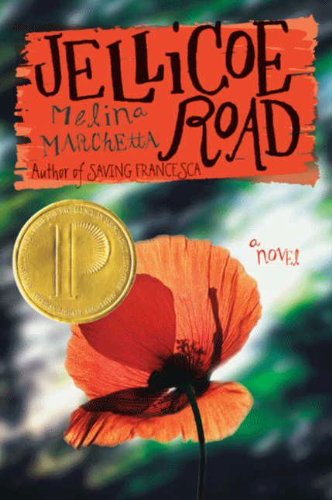 Jellicoe Road is a layered contemporary with a carefully-woven-in mystery. It’s beautifully written. But I have to admit, it’s also just the kind of book that makes me feel a little dumb, because I regularly felt like I didn’t fully understand everything that was going on (especially in the beginning). This can happen with complex books—I am often a lazy reader and don’t always pick up on very subtle nuances, which abound in this book. Still, that doesn’t make it a bad book and I did enjoy it (things made sense for me by the end).

Taylor Markham is 17 and she’s now the leader of all the houses at her boarding school outside a small town in Australia. She’s kind of an unlikely leader and isn’t overly confident in her abilities, but she’s stubborn enough to want to try. She’s had to learn to be kind of tough, as her mom abandoned her at a 7-11 when she was 11.

There’s an alternating storyline that takes place 20 years earlier about five kids around the same age as Taylor. Three of them survived a terrible car wreck on Jellicoe Road and ended up at the school, with the others being a local and a cadet. It’s not clear how this relates to Taylor, though naturally you suspect it must in some way.

Being the leader matters for Taylor because one of the main focuses of the book is the “war“ fought between the Jellicoe School kids, the “Cadets” (city kids who camp out for 6 weeks at the beginning of the school year for some outdoor experience), and the “Townies” (self-explanatory). The war is really about territory, thought there being teen boys involved, there’s also a spatter of physical violence. Who has what territory limits the areas the different groups can go. The first quarter to third of the book is full of complicated negotiations for territory and hostages.

Taylor’s main adult confidante is Hannah (who’s more of a friend than anything—and the one who found her at the 7-11). Hannah lives at a house very close to the school and is in the process of writing a book that Taylor’s curious about but has never read—at least not until Hannah mysteriously disappears near the beginning. The disappearance is very distressing for Taylor, but Hannah’s book ties into the history of the kids from the car wreck.

Things do come together very nicely at the end, and although it felt inevitable (as all good endings do), it wasn’t really predictable. I don’t want to give anything away, so I’m not going to say any more about the story, but if you enjoy nuanced and lovely storytelling you could very well love this book.