I’ve been reading more adult novels lately, but while I was out walking, I listened to a YA book by one of my favorite authors, Sarah Dessen. This was Saint Anything. 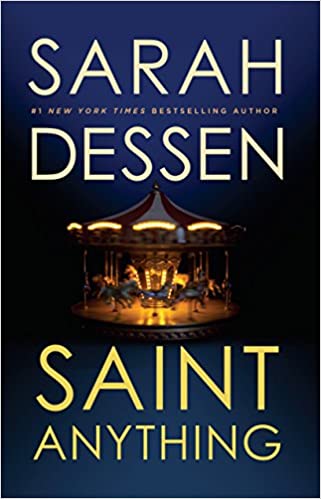 The premise of Saint Anything is that Sydney, a well-behaved teenager who lives in the shadow of her gregarious brother with his oversized personality, has her life upended when that very brother gets himself thrown into prison. Her parents, especially her mom, fixate on supporting the brother and making his prison stay as cushy as possible. But Sydney is torn up by the event that landed her brother in jail—a teen boy riding home on his bike late one night getting hit by Sydney’s drunk-driving brother. The teen survives, but he’s going to be in a wheelchair for the rest of his life. Sydney’s mom doesn’t seem to care at all about the kid, even going so far as to blame him for being out so late at his age.

At the beginning of the book, Sydney has transferred from the private school she and her brother have always gone to to the public high school, so she can have a fresh start where people don’t know everything about her. She’s pretty shy, so she’s lucky when she stumbles into a friendship with a girl—and then her family—at a pizza shop. This friendship is eye-opening for Sydney because Layla, Layla’s brother Mac, and the rest of their family are very open, in direct contrast to Sydney’s own buttoned-up family. Layla and Mac also come with some other friends. Soon Layla in particular is helping Sydney deal with her stress over her brother, and she’s getting closer to Mac.

Sydney is increasingly frustrated with her mom, who is so focused on her brother that she seems to forget Sydney is alive. There’s also a total creep who was her brother’s best friend and is beloved by their parents, especially her mom, so he’s constantly around. He’s gross and Sydney knows it but nobody else is paying attention to her.

Eventually, Sydney’s mom notices Sydney, at the worst possible moment, and her entire life is thrown into upheaval. Her parents blame Layla and co for being bad influences, and Sydney has to figure out how to fight for herself, friendship, and love.

I pretty much like everything Dessen writes, and this one was no different. Check it out.