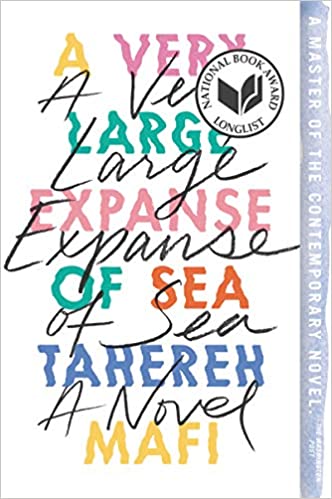 So I’m going to say up front that I loved this book. I wasn’t sure what to expect—I’d seen the Mafi’s dystopian Shatter Me series, but never read it since I mostly read contemporary. But I picked this book out because the setting right after 9/11 with a Muslim main character seemed interesting and I wanted to learn more about the actual experience of Muslim kids at that time, especially anyone wearing such an obvious outward marker as the hijab she wears. I obviously knew things would be bad for her, but I wasn’t sure how bad, or how that would turn into a novel plot.

So the book grabbed me right away with an explosive interaction Shirin has with her new AP English teacher on the first day of school. The instructor looks at her and basically tells her she must be in the wrong class, and when she shows him her schedule, he still assumes she shouldn’t be in there and acts all condescendingly sympathetic with his, “ah, this happens sometimes” crap, still assuming it’s a scheduling error.

At first I found it a little hard to believe he could be this much of an idiot—she’s already spoken to him during this exchange without a “foreign” accent because she’s a native speaker of English—and he just won’t let it go, but then I remembered that just because I am not generally around people who actually think the color of your skin and the presence of a headscarf have any relation to your ability to speak your freaking native language, I don’t actually know other people’s experiences, so yeah. I’m going to trust the author on this. And by the time Shirin loses it with him, I was right there with her and so glad she cusses at him. He absolutely deserved it and I loved her for calling him out so emphatically.

This anger she has, this impatience for idiotic, judgmental people making assumptions about her, actually drew me in in a really personal way. It will probably seem weird to people, but I actually related to Shirin more than I have to any YA character I’ve read in a while. It was all about the rage. She pretty much hates everybody because she knows they’re all judging, making assumptions about what she’s like and what her life and family are like.

I felt exactly the same in high school. People looked at me and the way I presented myself and disapproved of the way I "performed" my gender (spoiler: I didn’t), and they just wouldn’t let it go. There were constant barbs and I never knew where it would come from, or when. For me, it depressed me but mostly I was angry, and I hated people because they all sucked. If you’ve read my book Ugly, you’ll have seen this in Nic because it’s a semi-autobiographical book, but I actually toned the rage down in that book. Real me was angrier.

So I completely related to the way Shirin basically just tried to ignore people, and assumed there was no value in meeting new people or interacting with anyone around her. When a boy asks some ignorant questions, she assumes he’s being a jerk and only realizes over time that he really is just trying to understand and isn’t judging her, but he doesn’t know how to talk about things.

Anyway, more on the story. The boy in question is her biology lab partner, a white kid named Ocean. He offends her early on, but he perseveres in getting her to work together on their lab work and they even start chatting on AIM at night. A real friendship starts to emerge. This is very confusing to Shirin because Ocean’s just not like the other people she’s dealt with. In the meantime, she joins a school  breakdancing club that her brother starts along with some of his friends, and she starts developing her moves. I know virtually nothing about breakdancing, but the stuff they were doing sounded really physically demanding, and it was cool to see her grow in her skills over an extended period of time (the way that stuff works).

Shirin and Ocean soon find themselves in an actual relationship, and naturally some of the assholes at the school flip out because Ocean’s this big basketball star so he’s known and considered important, blah blah. After a shitty incident involving Shirin’s face and a thrown cinnamon roll, she takes off her headscarf in the bathroom so she can clean her face, and a girl comes in and takes a picture of her without the scarf—it’s such a horrible violation and really stressed me out for her. She and Ocean deal with more stuff and things come to a head when someone convinces Shirin that it’s in Ocean’s best interest to end things.

But there’s obviously more to Shirin’s life than Ocean, and the breakdancing performance the and her group do in the school’s talent show has a surprising effect on her life. Still, everything with Ocean feels unresolved, and it’s great to see how they manage to work through things even as the adults around them make their lives so difficult.

It’s also worth mentioning that Shirin is able to lessen her general anger (being angry all the time does not feel good, so this is a good thing) as she comes to see that not all people are the same.

This is totally unrelated to anything else, but I loved that she hides her headphones under her headscarf and listens to music all day. This is awesome.

Anyway, I loved this book and am not surprised at all that it was longlisted for the National Book Award. A lot of people will relate to it, but I think a lot of other people may be able to better understand how constant micro aggressions—not to mention physical violence and other full-on racism—can really wear a person down.