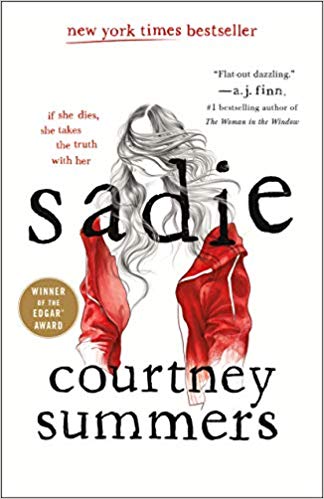 When I first heard about this book, I was sort of freaked out because of similarities it has with my own Sadie Speaks (still unpublished). I’m hoping I don’t have to change the name of my character because of it. Still, it sounded like an interesting book, so I bought it.

Sadie makes an interesting format choice. The book alternates chapters between the character Sadie’s narrative and the transcript (basically) of a serialized podcast called The Girls, narrated by West McCray (an adult man). It opens with the show, which gives Summers an easy and legitimate way to provide the setting and backstory. Thirteen-year-old Mattie was murdered and her older sister, Sadie, disappeared soon afterward. The Girls came about because Sadie and Mattie’s unofficial, stand-in grandmother, their neighbor May Beth, contacted West. Thus began his investigation and the show.

We learn a lot about Sadie from May Beth, but we learn even more about how people never really know the people they care about. Obviously we learn the most from Sadie's own narrative. What we know early on is that she’s heartbroken over Mattie, who she basically raised because their mother was an addict who eventually disappeared, and she knows who killed her. And she’s going to kill him. In the first chapter, we see her clumsily buy a car and learn that she has a significant stutter that makes most of her interactions with people difficult, or at least awkward. Thus begins her quest.

The show and Sadie’s narrative are on two different time lines, but they interact seamlessly, where basically something happens in Sadie’s chapter and afterward West will figure out that part of her journey, just in time for Sadie to describe her next steps. It takes a little while for West to “catch up” to Sadie in terms of the book, but it still works very well. What’s interesting about it is that despite the fact that we’re with Sadie for her journey, sometimes we learn more about it—in the wider context—from West.

Sadie’s a very interesting character. Even though she’s on a dark path, you eventually figure out why and sympathize with her. Despite that, I had a little trouble connecting with her, but I had no trouble rooting for her. The characters in the show storyline are pretty well drawn given the format. We can see West is credible, and he learns a little more about the darkness of the world and how it impacts him given that he has a young daughter. May Beth also is very believable and she too learns about the dark side of things. The characters that Sadie interacts with for fleeting moments are less developed as they’re seen entirely through her slightly distorted perspective, but the most important of them get revisited with West, which is interesting.

If you’re in the mood for a different kind of thriller, this might be for you. Like a lot of thrillers, it deals with some of the unpleasant aspects of the world, which makes reading it demanding at times. But it’s engaging and unusual and has an ending that will stay with you.