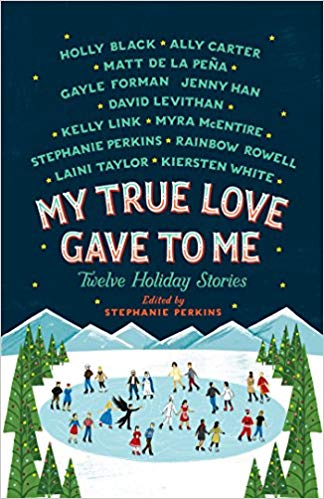 It’s probably a little odd to be doing a review of a holiday short story collection several weeks after the holidays ended, but since when did I claim to be normal. Besides, I started reading this before Christmas.

This nice collection focused mostly on Christmas experiences, but there were a lot of creative interpretations of that in the twelve stories, many of which came from big names. Rainbow Rowell’s “Midnights” was one I’d read (and loved) before. In it, Mags and Noel meet at a New Years party one year and the story focuses on their friendship over the years by showing us the subsequent New Years parties. It’s a sweet little romance. Next comes Kelly Link’s “The Lady and the Fox.” This was a creative one involving a ghost, but it didn’t really resonate with me (though I know a lot of people who are big fans of Kelly Link, so it’s surely just a matter of personal taste). The next story is “Angels in the Snow” by Matt de la Peña. I quite liked this one. It’s about a down-on-his-luck (i.e., completely and utterly broke) college student house/cat-sitting for a friend who meets a college girl from a very different background. It’s really about how they connect.

In “Polaris Is Where You’ll Find Me” by Jenny Han, a human girl is living amongst Santa’s elves at the North Pole. She has to figure out who she is despite being truly one of a kind in her surrounding. How do you figure out who you are when you’re different from everybody else? Stephanie Perkins’ “It’s a Yuletide Miracle, Charlie Brown” features a video maker and a guy with a great voice. It’s also a sweet little romance—with a bit of angst in it—that I quite liked. In “Your Temporary Santa” by David Levithan, a Jewish boy dresses up as Santa to give his boyfriend’s little sister one more year of believing in Santa. It's sweet.

“Krampuslauf” by Holly Black was kind of strange. Black does that well, though. I suppose it’s about wishing things into being. In the next one, I first have to say, kudos to Gayle Forman for naming her fictional college the University of Bumfuckville, which she does in, “What the Hell Have You Done, Sophie Roth?” It’s a nice story about finding your place among strangers—and not making stupid assumptions about people. “Beer Buckets and Baby Jesus” by Myra McEntire is a funny story about a prankster kid who accidentally burned down a church’s barn, where they stored everything for the annual Christmas pageant, and ends up helping pull said pageant off against all odds—and making a friend in the process.

Kiersten White’s “Welcome to Christmas, CA” wasn’t steeped in Christmas spirit, but it was a nice little story about appreciating and helping the people around you, whether you want to be where you are or not. And also psychic cooking. There’s that too. The next story, “Star of Bethlehem” by Ally Carter, deals with the unexpected consequences of two girls switching identities. Sometimes home can be found in the most unlikely of places. The final story in the collection is “The Girl Who Woke the Dreamer” by Laini Taylor. It’s about believing in yourself to the point that you manifest exactly what you need, with the help of a little magic.

There’s a good variety of stories in here so some should appeal to you. If you’re missing the holidays, pick this up to get back in the spirit.