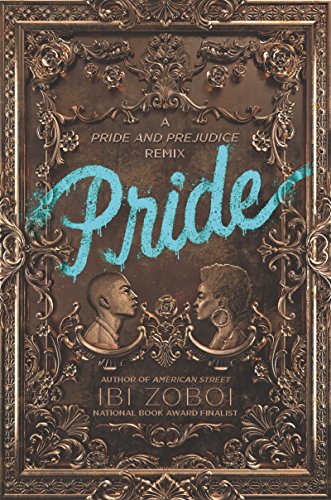 I read this sharp Pride and Prejudice remix quickly because it really sucked me in.

Zuri lives with her parents and her four sisters in their Bushwick (Brooklyn) apartment. The girls have to share one bedroom but Zuri is proud of her Haitian-Dominican family and her entire hood, as she calls it. When a very rich black family (the Darcys) moves into the renovated mansion across the street from her building, the whole neighborhood watches with fascination, especially when they spot the two teen boys, who are both rather fine. Every girl on the block is suddenly very interested in getting to know them. Everyone except Zuri, that is, because she resents the changes their coming represents. Her older sister Janae takes up with the older boy, Ainsley, while Zuri festers with dislike for the younger one, Darius. Darius doesn’t seem to like her much, either, and they clash a lot. After Darius tells Ainsley something at a party, Ainsley suddenly drops Janae, which makes Zuri hate them both even more. Zuri starts hanging out with a guy from her hood named Warren, thinking he’s the real deal next to phony Darius. But Darius has some info on Warren that Zuri needs to hear, even if it takes some time for her to get the news.

As with any remix, it’s fun to spot the plot points and compare them to the original. But Zuri herself is such a strong character that this book doesn’t need a classic to prop it up—it definitely stands on its own as a story. Zuri’s got a great voice, authentic (I’m assuming) and intelligent. She’s a strong personality and even though there were many times I thought she was being a bit harsh and judgmental herself, it totally fit her character. And Darius is a good variation on Darcy, being rather complex and imperfect.

Overall, this is a great book I highly recommend, whether you are an Austen fan or not.