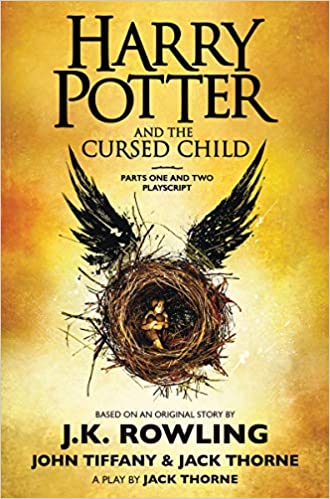 I've had this book a while and finally got around to picking it up. And I have to admit after reading it that I think it would work better as a produced play than a script (I was thinking that myself, but a friend of mine read the book and felt meh about it, but then saw the play and said it was awesome), but I still enjoyed the story.

Harry Potter's son Albus befriends Scorpius Malfoy on their first Hogwarts train ride. They're both socially awkward but their friendship is the real thing, and a few years later, Scorpius agrees to help Albus on a quest Albus believes will right the wrong Harry did in surviving Voldemort when he killed Cedric Diggory. The two manage to steal a time-turner and chaos ensues, basically. Because 14-year-olds don't always make the best, fully-informed choices (though to be fair, they felt a little younger to me than 14). While they're off wreaking havoc throughout the last 25 years, Harry, Hermione, and the others are trying to stop them and dealing with an additional threat.

Eventually, they all meet up in a way I didn't expect, and disaster is averted.

This is a must for HP fans, of course, even though it may not give you the fix you expect. It's never the same with sequels that change generations because you're just not as invested in the characters as you were before. But it's still a worthwhile tale.