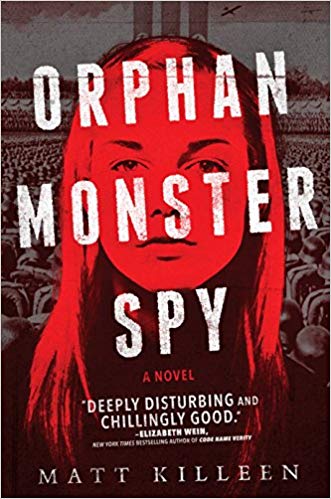 This is a book that came to me from one of those YA book clubs I belong to as I’d never heard of it. But I’m actually surprised there isn’t a little more hype around it because it’s very good and it’s got a believable badass girl in it. I guess historical fiction isn’t where it’s at right now.

Sarah is a 15-year-old blonde Jewish girl in 1939 Germany (actually I think Austria at the very beginning), which is not a good place for her. After a riveting opening scene where Sarah runs from the just-wrecked car her mom drove through a checkpoint, she makes a bold escape and encounters a man who becomes her “uncle.” He’s an English spy and has an assignment for her: become friends with a girl—Elsa—at an elite boarding school. Elsa’s father is considered a scientific mastermind and is working on the atomic bomb (they didn’t call it that yet, though—it’s “the grapefruit bomb” in the book).

Once Sarah—now Ursula—gets to the boarding school, she finds her task deeply difficult. There’s a social order at the school and she’s very much at the bottom and will have to fight her way to the top to get to the girl she needs to befriend. There are many, many obstacles in her way. One is her friendship with a girl they call “Mouse” for her meekness. More importantly, she’s got to impress the boss girl of the school’s tough-girl posse. Or fight her for the position. While in retrospect some of the middle of the book might have been dragged out longer than strictly necessary, overall I was completely pulled into the story and Sarah’s plight. Many times, her situation seemed impossible.

The characters in this book are solid. Sarah is very well-drawn as complex, sufficiently troubled for a girl with her experiences, and believably tough and up to the role. The spy who effectively hires her, Captain Floyd, is also a good character even though he’s not necessarily always likable. But he’s committed to his mission, which will ultimately help people like Sarah so we know he’s basically a good guy. Mouse is not deeply developed, but she’s perfect as a side character. Elsa herself is very flawed and her behavior seems a little weird until the full story comes out. So while she’s not super-developed, it works for the story.

The overall plot is also solid even if the middle is a little squishy (I just think some of the obstacles could have been removed/simplified, but that’s me). I also think the world building is done well. You really get a sense of Germany at the time.

The really fascinating thing about this book is that while it’s set against against Nazi Germany and the pending Holocaust, it’s really about something else altogether. This doesn’t become clear until very late in the book, but it’s been expertly set up. The author’s note at the end really highlights this. I don’t want to give it away, but one of his main points is that while people are quick to criticize the regular people of Nazi Germany for standing by and letting all the atrocities happen, we are standing by right now and letting everyday atrocities happen in our own countries. Just because these are smaller-scale doesn’t mean that we are any more excused for letting them happen.

Orphan Monster Spy is a very good book. If you enjoy reading WW II novels, this one will surprise you because it’s different. And if you’re not generally into that genre, consider checking it out anyway. It’s got a great message.