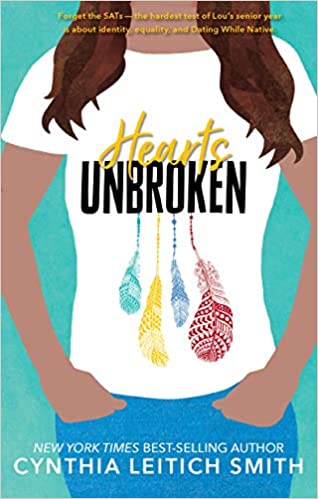 This is a rare book, featuring a Native American girl dealing with some interesting problems. The fact that her family is Native is important for a lot of reasons, including the plot and her identity. Lou is Muscogee (Creek), which was kind of cool for me because the Creek Nation extends from the southern edge of Tulsa a ways south, and the one time I went to a casino, it was the Creek Nation one that’s less than two miles from parent’ house. Not that I’m saying that casinos=Indian culture by any means, but I always find it fun to see something that is somewhat familiar to me in books I read, which rarely happens because I don’t generally live in cool places.

Anyways, Lou. It’s the beginning of the school year and she’s a senior while her brother Hughie is a freshman. Her dad is a dentist and her mom is studying to be a lawyer, so she’s solidly middle class. They recently moved to a suburb of Kansas City (I think, could be a different city) from Texas. The book technically opens late the morning after her junior prom. Soon after she manages to rouse her very hungover boyfriend, Cam, they go to have breakfast with his family, where his mom makes some racist remarks against Cam’s brother’s Native girlfriend and then Cam himself makes some stupid generalizations about Indians, as well. Lou’s pissed and breaks up with him. The reader unquestionably cheers her on for this.

The actual plot gets going once she starts school in the fall. The theater director casts several students of color, including Hughie, in the school’s production of The Wizard of Oz. This triggers the formation of of a group called Parents Against Revisionist Theater, led by the wife of the pastor at the biggest local church. While this gets started, so does Lou’s role as a reporter for the school paper and her friendship with Joey, the other reporter. There’s a little bit of healthy competition, as well as some sparks, between them. Of course, things proceed from there, with a lot of things happening. One of the things I liked about the book was how honest it was about the number and kind of microaggressions Indians have to deal with. People assuming, generalizing, saying overtly racist things (whether they mean them that way or not), etc. Then there were the ones that weren’t exactly “micro,” too.

My one complaint about the novel is that her relationships with her boyfriends were not developed enough for my taste. I especially didn’t see what she saw in the first, Cam, who didn’t seem to have a single redeeming quality. Joey was more appealing, but we still never learned what she really liked about him. So they both felt like plot devices. Otherwise, I thought the characters were interesting, if a little underdeveloped. Despite these feelings, I overall quite enjoyed the book. The story was good and it brought up some really interesting history I didn’t know about. One example: that the author of The Wizard of Oz passionately advocated for the genocide of all Native Americans. Which, you know, wow.

So I’d recommend this to anyone interested in a different perspective you don’t get much in YA (or literature in general, really). It’s a satisfying read.