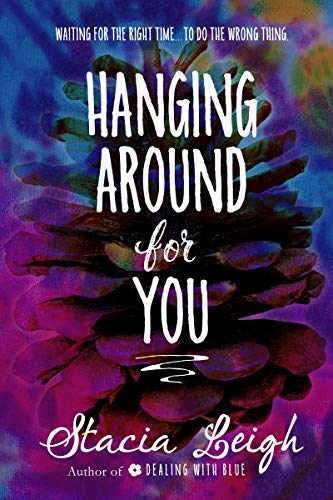 Hanging Around for You is a YA romance set in Leigh’s biker world in the mountains of (I think) Oregon. The first two books were clearly tied together, but this third one’s connection is much looser, though it’s there. Pinecone, the heroine, made an appearance in Leigh’s second book (Burnout, previously reviewed here).

Fifteen-year-old Pinecone has a terrible, narcissistic mom named Twyla who abandons her in the first chapter, leaving Pinecone with Twyla’s biker boyfriend, Ham. Both of them are upset by the abandonment, but what’s worse is what Twyla does after stealing Ham’s truck, which brings the police sniffing around, making both of them very nervous. Still, they make do, with Pinecone going to school while working at the Powerhouse Inn, which Ham owns, and avoiding her best friend, Dawn, because of the awkward situation of her missing, criminal mom. One day, Smiley walks into the inn’s lobby, and Pinecone is struck by his looks, but very much turned off by his interest in joining Ham’s biker club, the Pulver Skulls.

But Smiley’s on a mission. He’s not just a hang around; he’s looking for info. But it’s important that no one figures that out. Still, he thinks Pinecone might be a way into some crucial intel. Soon, he finds that he genuinely likes her, despite the fact that Ham doesn’t want him around.

At a pivotal Halloween party, Dawn finds out that Pinecone lied about where her mom was and she and Smiley make out. The fallout is dramatic: Dawn pulls completely away from her and Smiley friend-zones her at school soon after. It takes a while for those things to turn around, but fortunately they do. Just in time for quite the confrontation in Ham’s basement.

This romance may deal with the biker world, but it’s not gritty like you might expect, even though Smiley is really dealing in danger. Pinecone and Smiley make a great couple you’re rooting for, even though Smiley’s shady dealings are a little problematic. I suspect we’ll need a sequel to find out where things really truly land. But this book still makes for a nice story that fans of light YA romance will enjoy.