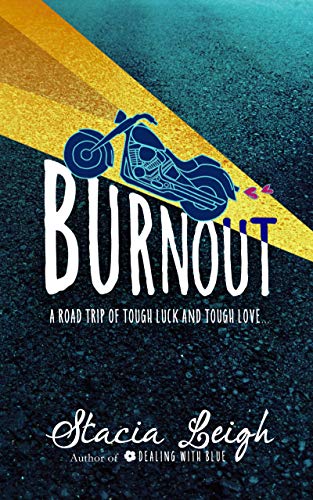 This book’s been sitting on my shelf a while (in very good company) and I decided I wanted a quick read that was not for my MFA, so I picked it up. It turned out to be perfect. Even though I’m in a bit of a reading slump, I read it in two days because it’s pretty fast-paced. It’s billed as a contemporary YA romance, but I’d argue it’s romantic suspense, although the suspense doesn’t get started right away.

Will Sullivan, who we met as J.J.’s drunk friend in Dealing with Blue, is having a rough time. His mom was killed by a drunk driver a year earlier and he’s never dealt with it. Instead, he drinks the beer left behind by his dad’s and brother’s biker friends. After wrecking his own bike, drunk, he’s in a world of pain. But he’s part of the Hides of Hell family even though he doesn’t want to join, and when they decide to ride to a rally and at the same time spread his mom’s ashes, he’s got to go with them. But he doesn’t have a bike anymore, so…

Miki Holtz is the daughter of the new president of the club and she’d love to get his attention at least every once in a while. She’s also Will’s ride to the rally. They have some history—they’ve played together since they were little kids, but now Miki likes him more than as friends. But she messed it all up a year earlier, and he’s not forgiven her. So it’s going to be an awkward ride.

This may not sound all that suspenseful, but that comes in once they’ve been on the road a bit. They end up spending the first night in a cheapo motel because Will made the mistake of taking one too many pain pills, and he can barely stay on the bike. The motel clerk acts kind of fishy and seems to recognize Will’s name. The next night, they flee the campsite and backtrack to the motel because they think the motel clerk knows something. That next morning all hell breaks loose.

Will and Miki are both cool characters. Miki a bit more so—she’s quite plucky, while Will’s a bit broody and depressed, but not overly so. He’s still quite interesting and it’s rewarding to see him finally deal with his mom’s death. Miki also has her own things to deal with, mostly her relationship with her dad and how she sees herself.

If you’re looking for a gritty (but not too gritty) romance with a couple you definitely root for, this one is for you.