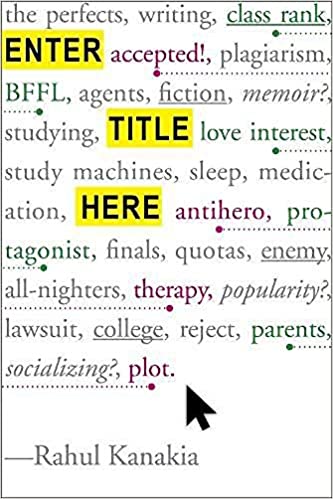 Rahul Kanakia’s pathologically competitive and high-achieving teenager Reshma Kapoor may cause less bloodshed than a favorite literary psyche authors love to explore—the serial killer—but she’s a fresher voice and even more deliciously warped. Early on, Reshma ponders her social life, concluding that “Alexandra is probably the closest thing I have to a friend. Which isn’t that close, because she’s not actually my friend at all: she just sells me Adderall sometimes.” This is exactly who Reshma is. She’s laser-focused on maintaining a perfect GPA in order to be valedictorian so she can get into Stanford. She will stop at nothing to make that happen, and if drugs give her the edge she needs, so be it. It is a joy to watch her, waiting for the train wreck.

On the opening page, we see an email to Reshma from a literary agent impressed with Reshma’s “brassy and articulate” voice in an article she wrote for The Huffington Post. The agent offers to read a novel if Reshma happens to have one. Reshma has never given fiction the time of day, but she seizes this opportunity to stand out from other Stanford applicants and claims she has a nearly-complete novel in progress. This is a tiny little fib, but she thinks two months is plenty of time to write one. Reshma’s literary pursuits don’t change her valedictorian goal, so we are still taken through the world of high school high achievers, which is complex and rife with emotional turmoil and questionable ethics. Although Reshma isn’t the exact stereotype of such a student, she is an extreme that anyone who’s been part of that world can believe. Kanakia makes her shenanigans fun to watch.

You don’t have to like Reshma or people like her to enjoy this book. In fact, you may find yourself rooting against her, which I feel is fine. It’s still worth picking up.