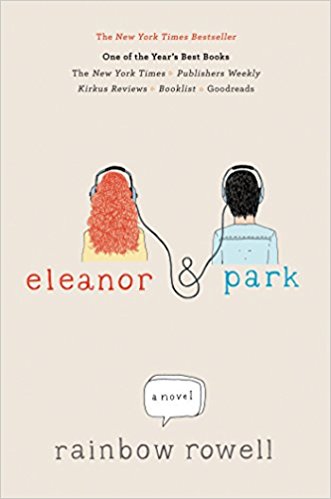 Eleanor & Park is one of my favorite books because it’s a wonderful emotional roller coaster-ride. Rowell is probably my favorite author because of what she can do with details. Who knew hand-holding could be as intense as she makes it?

This book was Rowell’s first foray into the YA space (she’d published other books for the adult market), but they weren’t originally sure if they were going to market it to teens or adults. I think they chose wisely, as she’s followed up with a couple other successful YA books.

Eleanor & Park is about—surprise!—Eleanor and Park. Eleanor’s new to town and her living circumstances are terrible so she has to scrounge for clothes. Even taking a bath is a huge and risky ordeal because there’s no door to the area where the bathtub is. The list of problems really goes on and on, but suffice it to say that her biggest one is her asshole of a stepfather.

Park, on the other hand, is a fairly normal middle-class kid with one exception—his mom’s Korean and that’s just not regular in their town.

The book opens in Park’s point of view when he deals with some of his racist classmates and then watches with everyone else as Eleanor appears on the bus for the first time, wearing a crazy combination of clothes. She’s desperate to find a place to sit and eventually Park slides over so she can sit next to him. It’s a risky move for him because now he’ll be associated with the freak who’s already been made fun of by all the kids on the bus. But he soon changes his mind about her and it marks the beginning of a slow-build relationship that readers (including me) love.

They don’t speak at first, but Park notices she’s reading over his shoulder on the bus (he reads comics), so he brings some for her to borrow. They still don’t speak much. Then he starts to share his music, even giving her a Walkman and batteries since she doesn’t have such things. Park is clueless about her troubles at home because she does her best to hide them, but they get closer and closer and eventually she starts spending most afternoons at his house.

But of course, the stepdad finds out and all hell breaks loose. This leads to a heartbreaking decision for both of them, even though the book (by most people’s reading) ends on an up note.

Really, I just adore this book. It so captures the intensity of first love. But it’s also a great story about a tough girl  who manages to get through some really horrible circumstances and eventually come out ahead. It’s kind of interesting, because in some ways I felt closer to Park while reading than to Eleanor, but this is fitting because of how closed off she is even with him. Rowell’s such an amazing author. I can’t recommend this book enough (for readers 15+, I guess).