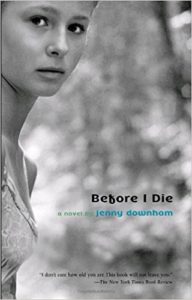 Before I Die (also called Now Is Good, though I prefer the former) is really a remarkable book. I’ve never read another one like it. It’s definitely the kind of story that stays with you. There are other books about teenagers who are dying, but this one feels different.

Tessa is sixteen and she has terminal leukemia. She has months left to live and is struggling with what to do with herself in her time left. She makes a list of things she wants to experience before she dies. They are pretty reasonable to me, given her age, even if some seem silly: to have sex, say yes to everything one day, break the law, be famous, drive, get her parents back together, and finally experience love. She’s a very level-headed girl and knows that the last is impossible in her situation, but a last bit of bittersweet luck allows her to meet a boy who does fall for her.

We’re dropped right into Tessa’s world. She’s been dealing with the cancer for four years and she’s sullen and feeling a little sorry for herself, but who wouldn’t be? She feels cheated and is having a hard time dealing with it. When she starts focusing on carrying out the items on the list, she finds they don’t bring her the satisfaction she hopes for. She starts paying attention to other things and notices little details about the world that most of us miss, imbuing them with personal importance. A bird flying in a straight line across the sky; light bursting through a hole in a cloud.

One of my favorite things about the book is her dad. He’s so sweet despite the fact that he is heartbroken. He really listens to Tessa in a way I think many parents would struggle to do in the same circumstances. She can say one thing and he knows that she really means something else. He’s trying to still parent her even while giving her a great deal of autonomy since they all know there’s no point in teaching her things about life since she’s not going to get to live it. He sets rules, she disobeys him, and he forgives her. The other characters are also good. There’s her insensitive eleven-year-old brother who alternates between telling her horrible things and expressing his love for her in his awkward way. Her friend Zoey isn’t the nicest person, but she’s a friend and she’s got a lot going on in her own life. Tessa’s mom is never going to win mother of the year, but she is believable and finally sort of comes through in the end. Then there’s Adam. The one weakness in the book to me was that I didn’t quite see why he fell in love with Tessa, but if you just accept that that sometimes happens, it works and he’s a good guy.

There was a quietness to the writing itself that made the experience of reading it more powerful. Through the book, Tessa experiences several rages and if you aren’t paying attention you would miss the intensity of them. But if you are paying attention, they are heartbreaking. The book will definitely take you on an emotional ride. It’s the kind of thing that makes you cry when you’re reading it, then makes you cry again later when you accidentally think about it.