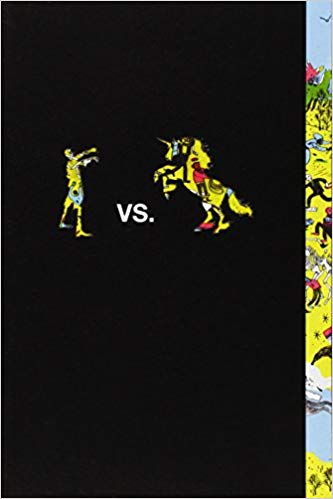 This is fun collection of mostly urban fantasy stories centering on (duh) zombies or unicorns. It is framed as a competition between the two editors, where Team Zombie is led by Justine and Team Unicorn by Holly. There are twelve stories in the collection but I was only able to read ten of them due to a weird printing error (pages from one story later in the book replaced pages in two other stories earlier in the book). Not sure how that happened with a major publisher like Simon & Schuster, but okay…

The first story is “The Highest Justice” by Garth Nix, on Team Unicorn. It’s a fairly simple fantasy story about a princess being given what’s rightfully hers with the help of a unicorn dispensing justice.

“Love Will Tear Us Apart” by Alaya Dawn Johnson is the first Team Zombie story. It’s about a zombie named Grayson who’s got a big crush on a boy named Jack. There are some pretty funny moments in it. When he’s talking about how he doesn’t know who he was before he caught the prion that makes him a zombie, he says about the prion:

That means it has to be drunk, snorted, dripped, or anally inserted. Yeah, I don’t want to know what the fuck I was doing either.

The story’s told mostly in second person (“you”), which I am not a fan of. (Actually, it drives me crazy and I sort of hate it. But I didn’t hate this story, mostly because it moves at a fair clip.)

The next story is “Purity Test” by Naomi Novik, a unicorn one. It’s also funny. An evil magician has been kidnapping baby unicorns and an adult unicorn is on the hunt for a virgin to help stop the bad guy.

The next two stories—“Bougainvilla” by Carrie Ryan and “A Thousand Flowers” by Margo Lanagan—are the ones that got the pages from another story dropped in the middle of them. So I can’t say anything about them.

“The Children of the Revolution” by Maureen Johnson is another zombie story. It too is funny (this is a theme for much of this collection). In this one, a college girl dreamily follows her boyfriend to England to pick berries only to find that this is backbreaking, soul-destroying work. After he abandons her for the greener pastures of London, she ends up getting a gig babysitting some weird kids. Some very weird kids.

“The Care and Feeding of Your Baby Killer Unicorn” by Diana Peterfreund gives an interesting take on unicorns. Maybe they’re not what they’re supposed to be—maybe they’re vicious killers. But what about a baby one?

“Inoculata” by Scott Westerfeld is another zombie story. A few years after the zombie apocalypse, some teenagers are bored living with each other and a handful of adults, running pointless drills to stay prepared. So one of them figures out a way to make things more interesting—for both the kids and the zombies.

The next story is “Princess Prettypants” by Meg Cabot and it has the honor of being my favorite story in the collection because of its humor. A seventeen-year-old is given a unicorn for her birthday and doesn’t know what to do with her—until she figures out a perfect way to use her, to great effect.

“Cold Hands” by Cassandra Clare has a slightly different take on zombies (the book says it’s like the voudin tradition of the possessed dead) that leads to a very different love story.

Kathleen Duey’s “The Third Virgin” takes a dark look at the downside of being a unicorn with healing powers. It’s told from the perspective of a unicorn who just wants it to all be over.

A lot of these stories are fairly long, but they also are pretty deep. They explore different themes and in the end, I can’t say whether zombies or unicorns won. That will have to be up to you. But if you like fantasy/dystopian, you might enjoy this collection even though it’s almost ten years old.