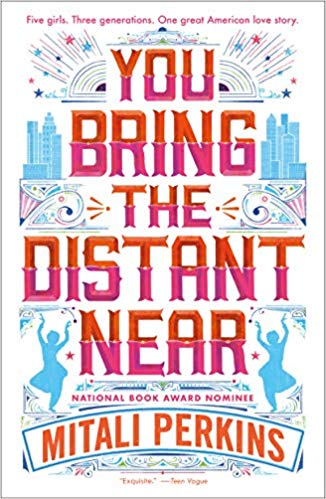 I think this book came to me through a book club I’m in and I’m glad because I loved it. I’m not quite sure why I love books about identity so much, but I do—it’s probably one of the reasons I like YA so much.

You Bring the Distant Near is, as I mentioned, all about identity. That is racial and ethnic identity, but also everything else that makes a girl who she is. It’s really about four girls—sisters and their daughters—but the mom/grandma has a few scenes that add a different perspective to the story.

We start off with Sonia, at eight years old in 1965. She and her sister, Tara, live with their parents in Ghana. In this scene, Sonia’s mother (Ranee) ruins a swimming race she was going to win, which reveals quite a bit about both of them. But then the book jumps forward to the mid-seventies, when the family moves to Queens. Both Sonia and Tara settle in well enough. Tara channels Marcia Brady to fit in as much as possible while Sonia embraces the feminist movement. Then they move to New Jersey, where Tara finally gets her official start in drama. The story jumps ahead two more years, when they are both nearing real adulthood, and continues until we see them married. Then we jump to 1998, where we meet Sonia’s daughter Chantal and Tara’s daughter Anna. Chantal is as American as can be and when Anna comes over from Mumbai to go to high school with her, it’s a real struggle for Anna because she’s used to life in India. By the end of the book, Chantal and Anna are grown but their futures are yet to be decided. Possibilities are everywhere.

Okay, having written all that, the theme of identity may not seem obviously present, but it’s absolutely crucial to everything that happens. Ranee is distrustful of anyone who isn’t Indian (preferably Bengali) or white, which is a challenge for her in Flushing, Queens. Sonia hates her mom’s racism and her restrictions that keep Sonia basically locked up in the apartment. Tara’s always looking for her identity by trying on different personas, Twiggy the British model and Marcia Brady to name a couple. She’s able to manipulate her accent how she wants. Both she and Sonia push against their mother’s idea of who they should be to be good Bengali girls. They fight against what they perceive as outdated traditions at their father’s funeral (I don’t know the right word), shocking all the Bengalis in attendance. When we get to Chantal and Anna, the struggle for identity is even stronger, particularly for Chantal because her father is black. But it’s there for Anna, too, who wants to hold on to her own Indian identity even when in America. The final question of identity comes into play with Ranee herself, an interesting surprise near the end of the story.

Although the story jumps ahead at several points (which I don’t always love), it’s told in chronological order and is easy to follow. And as I’ve implied above, the characters are all complex and interesting. I personally most identified with Sonia, but any reader should be able to find one of the girls to relate to. The character arcs are clear even if there isn’t a strong plot that spans the whole book (I don’t think one is necessary).

I think anyone who enjoys exploring identity will enjoy this book, but it will especially appeal to Indians and other people who have strong ties to countries other than the one they live in. It’s a well-told story.