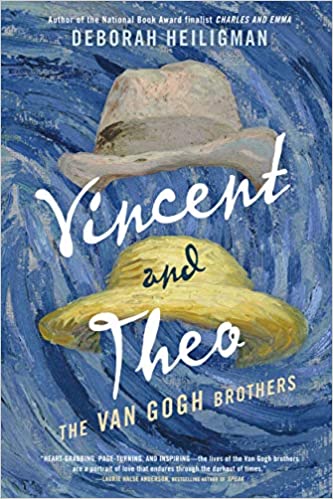 I’ve recently become aware that there is actually a decent amount of YA nonfiction out there, as I’m working on one myself, although mine is more technical than narrative. One of the authors I found is Deborah Heiligman, who wrote Charles and Emma about Charles Darwin and his wife, which was a finalist for the National Book Award. I bought that book, but the first one I decided to read was her one about Vincent van Gogh.

Vincent and Theo is a great exploration of Vincent’s rise as an artist, and all his stumbling along the way, as well his relationship with his steadfast brother Theo, who literally and figuratively supported Vincent pretty much all his adult life. This is basically a birth-death portrait of both of them, and it starts off describing their rather commonplace, middle-class childhood in The Netherlands. Their father was a pastor and they had several sisters and everything seemed pretty normal and positive in those days. Vincent and Theo were close despite a four-year age gap, even pledging to always be there for each other in their late teens. Their uncle worked in the art industry as an art dealer, and it was expected that both Vincent and Theo would go into that field. Vincent had no intentions of becoming an artist in the early days.

So Vincent did come of age and start working as an art dealer. But it didn’t take long before some of his more difficult personality traits emerged and although they tried moving him to London, it really didn’t work out. This period was really the point at which his mental health challenges started to emerge. Vincent floundered around for a while and became intensely religious for a period of time, trying to make a career out of evangelism. But this ultimately didn’t work out, either, and he floundered some more before finally deciding to become a draftsman. He threw himself into this with unrivaled intensity, drawing and painting in watercolor (which he actually still called drawing) to train himself to render things accurately. Eventually he started working in oils, and became a full-fledged painter. Theo literally supported him through all of this, sending him money for rent, food, and art supplies, sometimes sending paint directly.

Although he had no responsibilities except to his own development as an artist, Vincent didn’t do that well. He tended to not eat or generally take very good care of himself, something he did his entire adulthood. He got romantically involved with a prostitute who had first one child and then another (not Vincent’s) and they moved in with Vincent. Poor Theo was then responsible for two adults and two children, and the woman’s mother was somehow involved in all of this. It just sounded messy to me. During all this, Theo is encouraging Vincent but still saying he’s not skilled enough, so he’s developing, developing, developing. Eventually Vincent and the woman split up, Vincent moved around a bit, and then he finally started having the beginnings of success. He became part of the European art scene after Theo managed to sell some of his pieces. From this point on, Vincent was a real artist, but he also truly struggled with his mental health and he still wasn't pulling in much actual money. He and the artist Gaugin lived together and encouraged and challenged each other, drinking together a lot, as well.

Although the author never says it, it sounds to me like he had classic bipolar disorder, the variant with full psychosis (bipolar I). And his habits of not eating and not taking care of himself—and also drinking excessively—are some of the worst possible things bipolar sufferers can do. I’m not sure why, but the drinking in particular makes it immensely harder to regulate feelings, which is the downfall of a sufferer. Things can spiral up or down, neither of which is a good thing. And of course this one in the days before Lithium. Untreated bipolar disorder is a nightmare.

Everyone knows of the incident with Vincent cutting off his own ear. We sometimes trivialize that—it even seems kind of funny. Heiligman doesn’t go into detail about it, either, but think about it—he took a razor and cut through the skin and then all that cartilage. And anyone who’s ever cut their ear accidentally knows how painful just some dinky little cut is. This would have taken Vincent real time. It just makes me ill thinking about it. He also delivered the ear to a prostitute at one of the brothels he frequented, something he later felt really guilty about. He did eventually recover from this incident, but after trying to keep painting and having some more ups and downs, his struggles continued and eventually he shot himself somewhere in his torso from what I gather. He survived initially but was still mortally wounded, but it allowed Theo to reach him and spend time with him before he died.

I’ve talked mostly about Vincent here, because although the book itself spends as much time on Theo and his own tribulations (he didn’t have an easy time of things, either, although he doesn’t seem to have had any significant mental health challenges), the whole reason for the book is because of how important Vincent became in the art world. And that never would have come to be without Theo’s support. Interestingly, their mother had some of Vincent’s paintings but didn’t keep them safe, and they didn’t survive. Nobody in his family saw his successes except Theo, forever viewing him in terms of his earlier failures. Theo, on the other hand, was 100% committed to sharing Vincent’s work with the world. Sadly, he barely outlived Vincent. Both Vincent and Theo contracted STIs from all their cavorting at the local brothels. Theo’s syphilis killed him, cruelly sending him into madness beforehand. But his wife, Jo, took over being Vincent’s advocate, and it is because of her dedication—a direct result of Theo’s dedication—that so much of Vincent’s work has survived. Theo and Jo’s son, who they named Vincent and who was still a baby when his uncle and father died, didn’t go into art, but he did help found the Van Gogh Museum in Amsterdam.

Normally I don’t talk as much about an entire book when I review it, but I just found this story fascinating and full of things I didn’t know. But one of the things that makes the book stand out is how personal it feels. Obviously Heiligman doesn’t know with certainty how each of the brothers truly felt, but they sent heartfelt letters back and forth sometimes almost daily, and she worked off of those. Some purists may prefer to just read the translated letters directly, but I liked (and trusted) Heiligman’s interpretation. If you are wanting to understand more about who Vincent and the most important person in his life really were, and what they were like, this is a great book for that. It may technically be YA, but it will appeal to anyone interested in the brothers’ story.