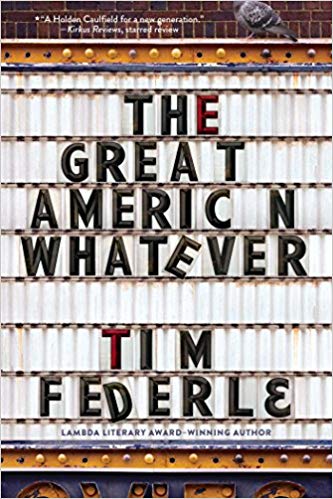 I had heard of Federle because of his Better Nate Than Never middle grade series, but I’ve never read them. So The Great American Whatever was my introduction to him. It’s about a movie- and screenwriting-obsessed sixteen-year-old boy named Quinn. About five months before the book opens, Quinn’s sister Annabeth was killed in a car wreck, which has him devastated and not particularly functional. She was his filmmaking partner—they had a production company called Q&A Productions and Quinn envisioned them going to Hollywood together some day.

Now, he hasn’t been to school since the accident, which happened the day before Christmas break, and summer’s already started with its incessant heat (he’s in Pittsburgh). In the beginning of the book, Quinn’s long-time friend Geoff shows up to force him out of the house. This sets off a series of events that finally brings Quinn out of his shell (and out of the closet, even though everybody already “knew”). Geoff takes Quinn to a college party, where he meets love interest Amir, and things take off from there.

I feel like there isn’t a strong plot in the book, but Quinn does have a clear coming-of-age character arc. He learns better to look at things from other people’s perspectives and matures quite a bit in other ways. He’s a good character in that he’s very flawed and still relatable. He’s rather self-absorbed and a bit on the arrogant side, at least in his two known subjects (i.e. movies and screenwriting), but he's vulnerable and cares about his family and friends. His friend Geoff is a generally good guy who turns out to have a secret that blows Quinn away and drives them temporarily apart. Amir is fine as a love interest, though he was kind of bland. Quinn’s sister features a lot in the book through flashbacks, and she is very interesting and more complex than you realize at first. Still, Quinn’s voice and attitude make the book what it is—funny and full of movie references any film buff will love.

So if you like coming-of-age stories, especially those with coming out storylines, you will probably like this.