Last weekend I attended my first book event as part of the Author Event Network, the Shoreline Holiday Market held on the ground floor of the Shoreline City Hall parking garage. The most notable thing was how cold it was basically outside without even the sun to warm us up. It reached the low forties by noon, but didn’t go much higher. I got there about 9 and didn’t leave until after 5, so I appreciated the decent coat I have and the portable propane heater I bought the day before. I actually didn’t appreciate the heater until the propane canister ran out, and then I realized it actually had been helping quite a bit, as it got noticeably colder.

There were six of us there, selling different kinds of books. We each had about 3 feet of table space, and I tried to make the most of it. I feel like my display was pretty good, honestly. Here’s what it looked like: 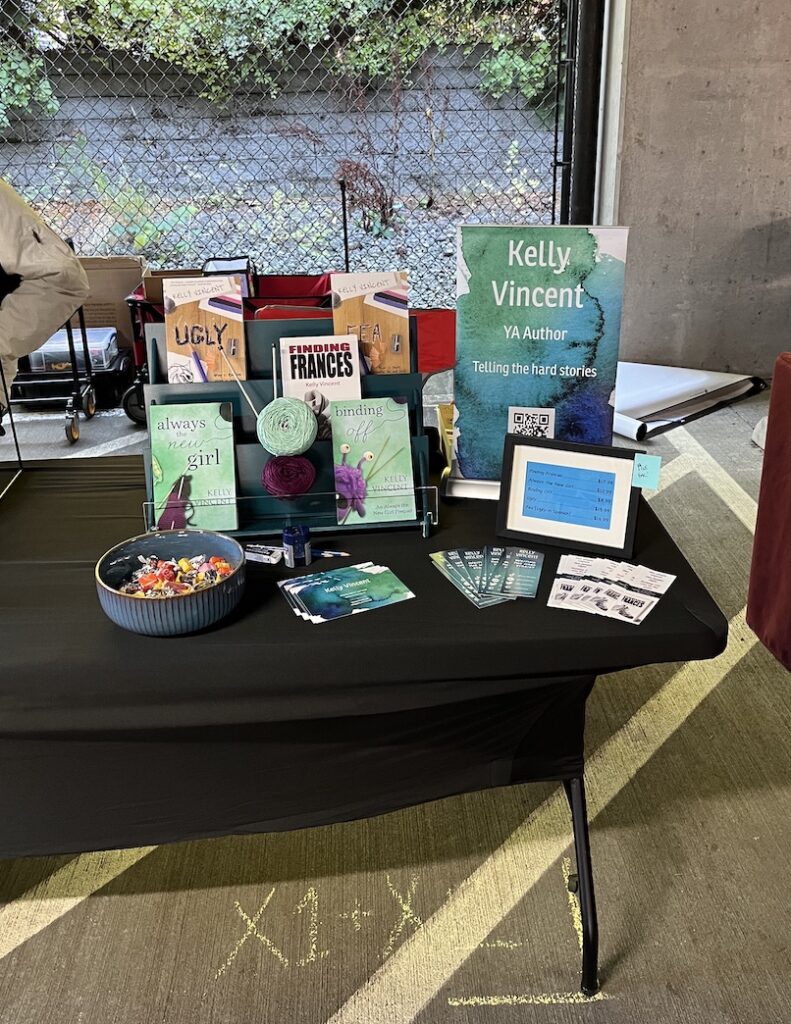 I’ve definitely got the blues and greens going on, with a splash of purple. Assuming I get the rights back on Finding Frances I’ll have to do a cover with those colors, too.

I took a couple shots of the full event setup a little before it started, so you can see the scale:

Nobody’s there yet—the quiet before the storm. The event was actually pretty well-attended and our table for a lot of traffic. Here’s my view from my chair: 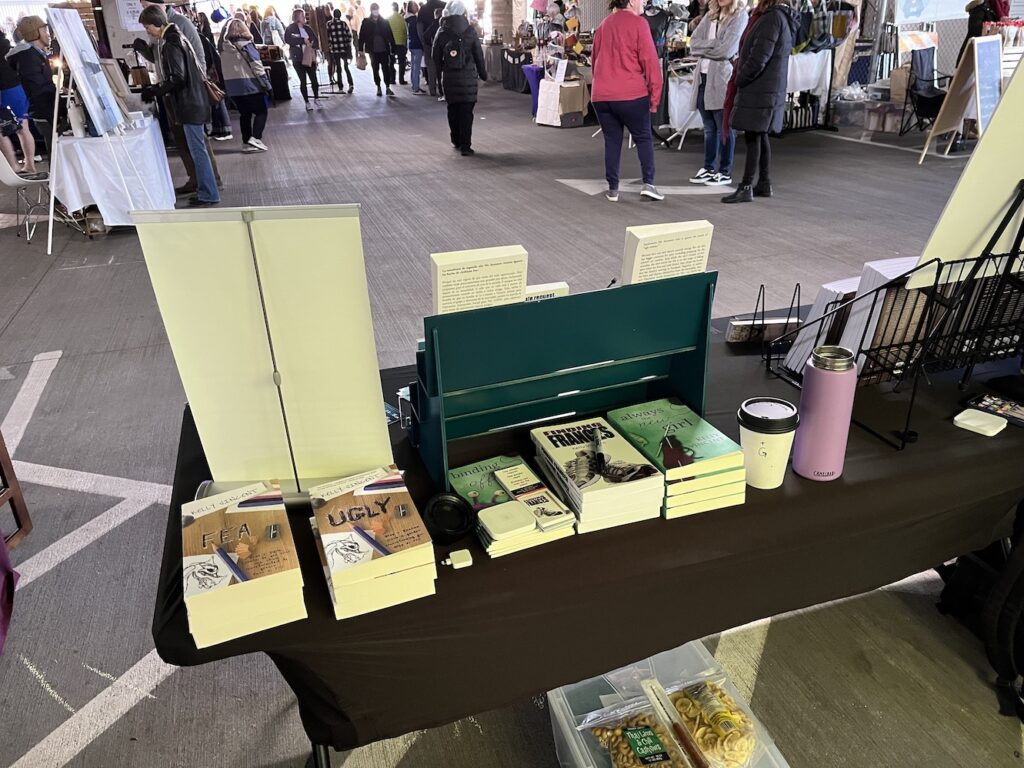 In the above picture, you can see a sample of the crowd. A lot of the authors did really well, selling upwards of 20 books. I did not do so well, but I learned a lot while I was there. One thing is I’m going to have to come up with better hooks for all of my book descriptions. It’s true that I am able to talk about my books more coherently than I could at the beginning of my author journey. I don’t ramble about plot details or anything, but there’s not much of a hard hook to it. So I’m going to work on that before going to additional events.

I also learned that you don’t want the end spot if you can help it. I saw many people stroll past my table only to stop at the next one when they finally noticed books (and not backtracking to mine). Only a few people took candy without looking at my stuff, but I learned that Starburst are not the best candy to bring when it’s freezing—they were hard as rocks.

It looks like none of the 2023 events are until summer, so the Starburst won’t be a problem and I’ve got time prepare some hookier pitches. I was originally hoping to have Uglier out by next summer, but I don’t think that is going to happen because I’ve reprioritized my nonfiction project at least until I can get the proposal done. But who knows; I might get a burst of productivity. 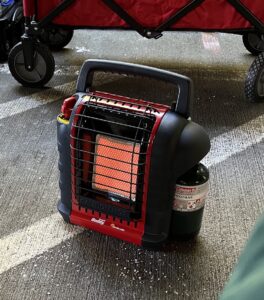 I’d been looking forward to the first in-person writing conference since 2019, which finally happened last weekend. I’ve been going to PNWA’s conference for years and during the pandemic they and everyone else switched to online. Although that is very logical, I have gotten to the point where I am so, so sick of online conferences. I went to eight or so. So it was great to be back and to see people I hadn’t seen in a while, and just generally be amongst writers. My friends and I hung out and compared sessions like we used to do.

I also met a few new people, including some agents I was able to spend a bit of time talking to. One of them even encouraged me to reach out about Ugly and my nonfiction project. I’ve emailed her but haven’t heard back yet, but I know she’s incredibly busy, so it probably doesn’t mean anything after just a week. Anyone who’s followed my blog will know I’m not holding my breath at this point, but I am not an idiot and am not going to pass up a possible opportunity. I have no idea what might come of it.

One additional thing I realized while I was at the conference was that I am also really burnt out on workshops. I napped through several (in my room, don't worry) and went to a few that underwhelmed me, and I don’t think the problem was the sessions—I think I may have just hit my limit of writing workshops needed in my lifetime.

A Win (for Someone Else, But Still)

One cool that happened is that my fellow YA-writer and friend Stacia Leigh won first place in the contest’s short story category. This was a(n adult) story she wrote about her father’s death, where he experienced some dementia at the end and she imagined what that might be like. I critiqued it I think twice and I already knew it was good, but it was cool that it won. She’s finaled I think seven other times and never made it in the top three before, so this was cool.

Stacia and I also had a table at the book signing they had Friday night. There weren’t that many indie authors—I heard there were about twenty, but it didn’t look like that in the room to me, so I don’t know. But we had the best table by far: 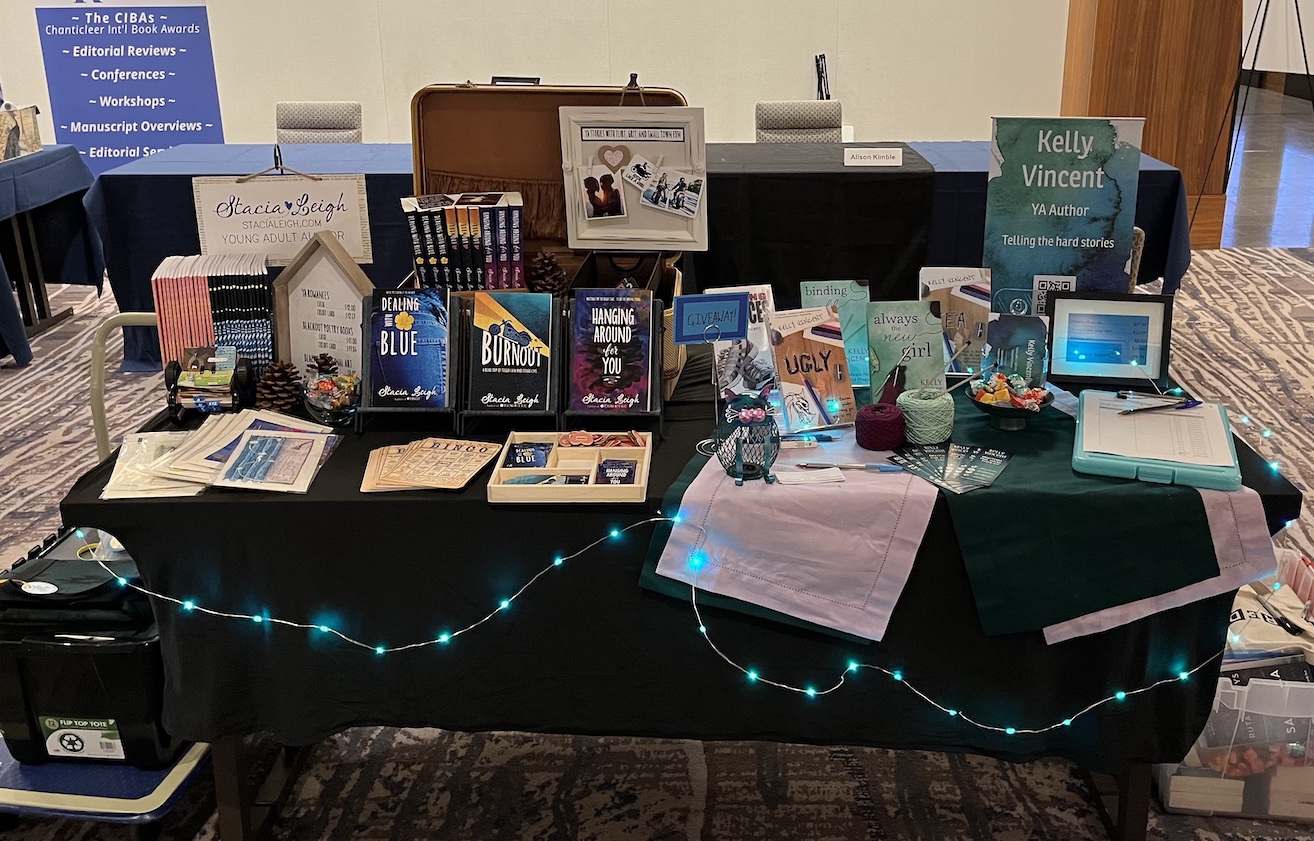 Stacia’s is on the left side and her setup is definitely better than mine, but I think mine looks good, too. (Stacia’s also an artist and is way more into crafts than me, so this is more in her wheelhouse than mine.) Here’s a closeup of my side: 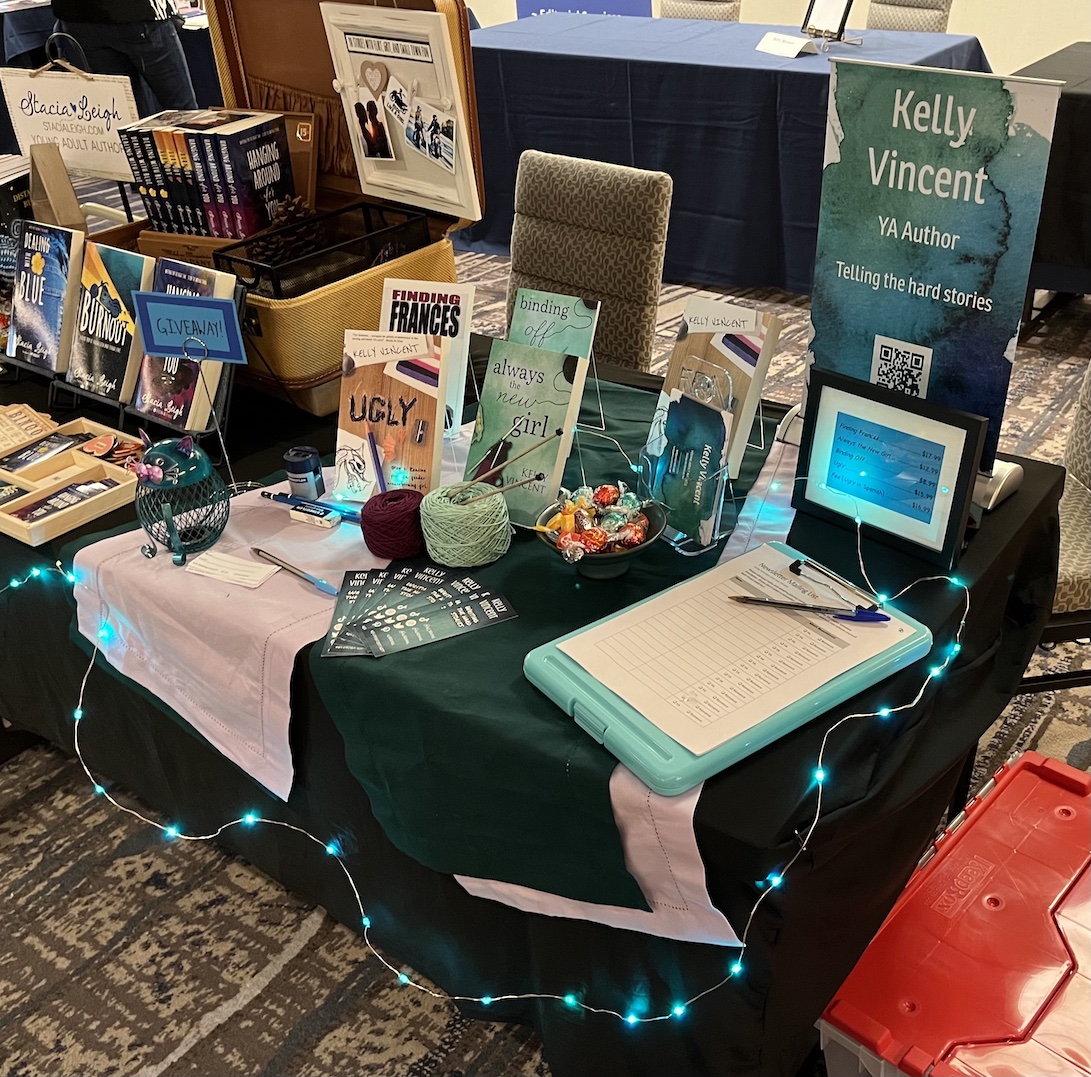 I recently bought a new display for the books that staggers them vertically, so that will look better. It’s from Clear Solutions. I'm considering painting the wood parts blue or a bluish green, since that's sort of the theme of my display. But here's what it looks like: 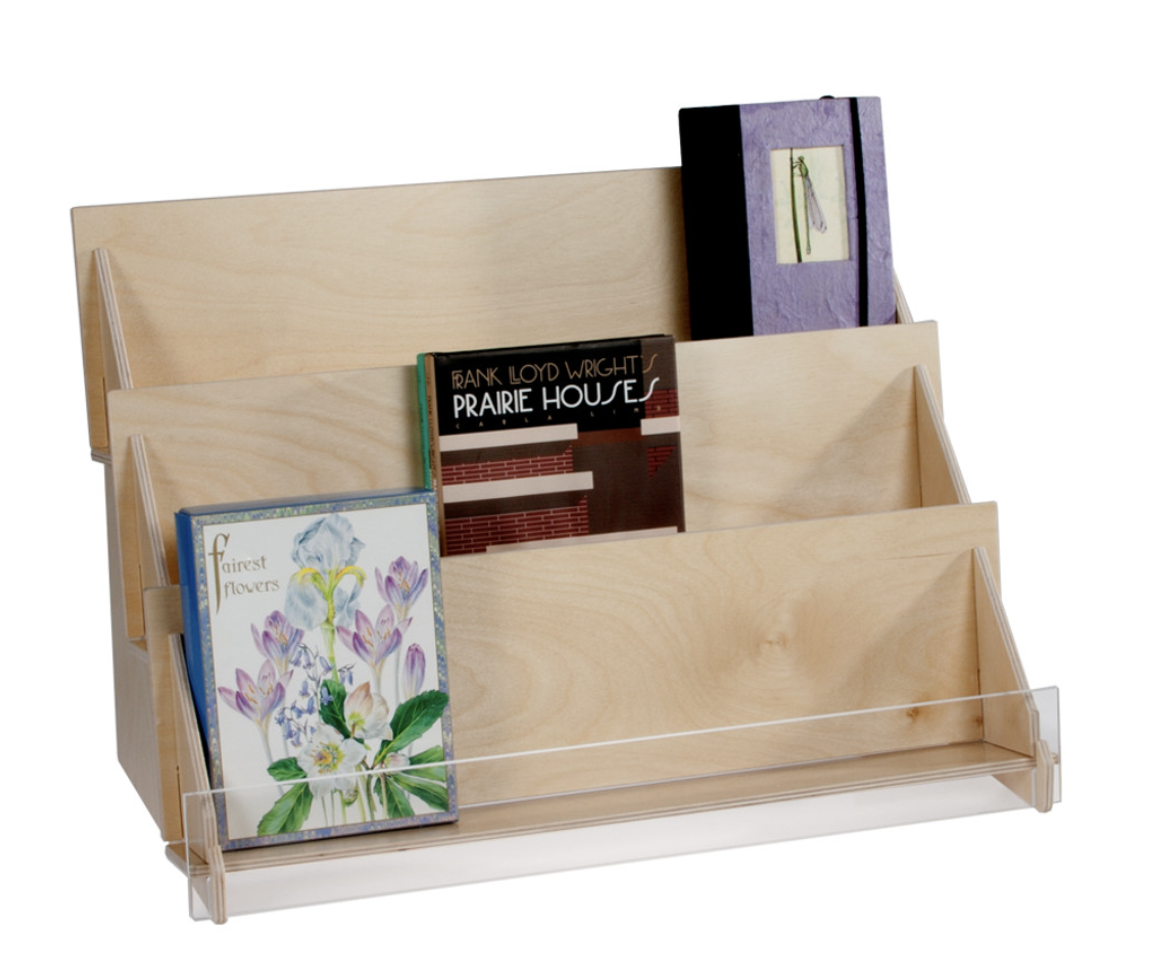 Anyway, things went pretty much like I expected—virtually no sales for me (two to friends). No one signed up for my mailing list or entered my giveaway. Some people did take candy. Stacia did run into someone she knows from her daughters’ school who she didn’t know was also a writer, and this person bought all five of her books, so that was nice. My own book-purchasing friends paid in cash, but Stacia’s used my Square reader (we had set this up in advance) so now I know this works.

One other thing that came of the weekend is that I met a guy who runs a group called the Author Event Network, which I ended up joining. He works with local events to get tables/tents for the members of the group. The idea is that it’s better for each author when there are other authors around, and I think he can also get better rates since he’s representing multiple people (I’m not sure about this, however).

The annual fee is relatively low, and then you just pay a relatively small fee for any events you actually attend. He only started this in December 2021, and he’s planning on keeping the number of members limited to make sure there are good opportunities for everyone. The remaining events this year are all pretty far from me (out on the Olympic peninsula), but I think I’m still going to try to make at least one to try things out. He says he really does well at these events. I haven’t really tried this, but I know other authors find events worth going to, so I figure I should give it a try. Even if I did decide to quiet quit.

Unrelated to PNWA, I also broke my quiet quitting decision by paying for an Kirkus author profile on their website (where it will remain permanently so I can always point to it). They said I could talk about more than Finding Frances (the starred review for that is what inspired them to contact me because there’s a list of recommendations you can be added to if you buy some type of ad), so I also mentioned Ugly.

A journalist interviewed me this past Thursday for it, which was kind of an odd experience. I was reminded of how weird and awkward I am. The profile is going to run in November, and I paid for a package that includes ads in the print magazine on November 1st and 15th, as well. Hopefully this will do better than my last ads did. This one has both Finding Frances and Ugly in the ad.

That’s pretty much where things are right now. Full steam ahead, also known as puttering along.

For more, follow my blog for reviews and more news about my writing, and consider signing up for my newsletter.