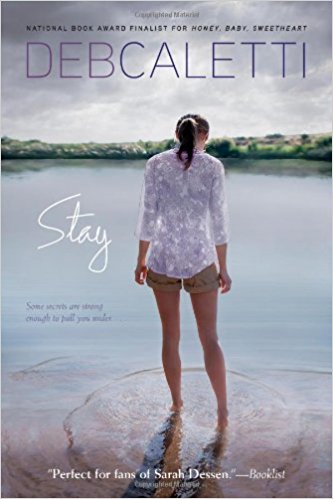 If you’re sick of all the romanticized obsessive love that’s in YA literature today, this is the antidote.

17-year-old Clara Oates goes with her father to a small coastal Washington town from Seattle to escape an obsessive and increasingly dangerous ex-boyfriend, Christian. The plan is to hide out for a while and hope Christian moves on. The book tells the story from that point, but also goes back and gives us the history of the relationship, from the first night they met. The first chapter opens with that very first meeting before bringing us back to present time, where Clara and her dad are getting settled in the Airbnb-type house they’ll be staying in and trying to figure out what the guy who owns it does for a living.

Her dad is a well-known mystery writer so hiding out is a little iffy. Still, they hope it works. While there, Clara gets a job and meets another boy and we see her really starting to move on. All while she goes over the increasingly disturbing history of her relationship with Christian.

Caletti could have been lazy but she gives us numerous subplots in the present-day that keep us intrigued. And something I loved about the book is that although Clara is clearly wiser than she was before Christian, there are still many things she doesn’t know, particularly about her mother and her father. So she still has more to learn, even though at the beginning of the book she already thinks she’s learned everything she needs to.

The voice in the book is wonderful. It’s told in first person and Clara is open and so real. She’s also self-aware at the point she’s narrating the book, but she’s telling the story of herself going from a fairly naïve girl to a much wiser one. It’s unusual in its use of footnotes, which adds something kind of fun, because Clara gives us little facets of the story that aren’t necessarily required but are interesting. For instance:

** Telling people about your dead mother is always delicate. You have to be prepared for them to spill their sympathy as if it happened yesterday. … I deal more with their reaction than they do with mine, and so you have to choose your timing.

Caletti’s writing is beautiful and it’s no fluke that she was a National Book Award finalist. The characters are all well-drawn and distinct through witty and natural dialogue.

I’d recommend this for all teens who are dating or considering it because it provides a very relatable and realistic (but not preachy) cautionary tale about possessive and obsessive love—the kind that leads to long-term domestic violence. And too much of YA features those kinds of relationships as admirable. They’re not, and this book shows why.