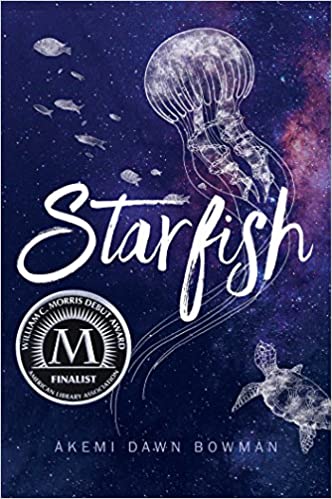 Starfish is the story of Kiko Himura, a 17-year-old Nebraska girl with a Japanese-American father and an obnoxiously white mother (who’s a total narcissist, but the way). Kiko’s mom has belittled her her whole life for not being “beautiful” like she (the mom) is. By beautiful, she means blonde and blue-eyed. Because Kiko takes after her father physically. To white people she’s too Japanese, and to Japanese people she’s too white. It’s not just her mom—the kids at school make sure she thinks this, too.

Unsurprisingly, Kiko’s anxious and lacking in self-confidence because she believes it all. She also thinks she’s responsible for breaking up her parents. When she was young, her uncle did something to her and she told her mom, who didn’t believe her. Still, Kiko thinks her parents were fighting because of this, and then her dad left. She’s got an older brother and a younger brother, but they’re not close. So she feels guilt on behalf of both of them, too. Kiko’s mom really is a piece of work. She’s so horrible that she’s almost unbelievable—but not quite.

Kiko’s a very talented artist and has applied to an elite art school in New York as her escape plan. But when she doesn’t get in, she’s distraught. And she’s hamstrung by her anxiety. But she’s lucky enough to run into her old friend, Jamie, who’d disappeared from her life when she was eleven and sort of broken her heart. Jamie invites her to come to California with him and she decides she’ll look at art schools out there. Jamie helps her ease out into the world. With a long overdue stroke of good luck, she meets a well-known established artist who takes her under his wing. By chance, he is Japanese-American too, and he helps her connect to her Japanese heritage for the first time. She and Jamie get closer, but there’s something that’s keeping them apart, too. She’s staying with him and his parents, and his parents are fighting and Jamie won’t tell her why. Eventually, everything comes to a head in a way I didn’t expect (but absolutely worked) and we see Kiko coming out of her shell.

This is a solid novel that will appeal especially to mixed-race kids, I’m guessing. The references to art throughout will also be particularly to those artistically inclined. But anybody can enjoy it for showing a girl finding her way.