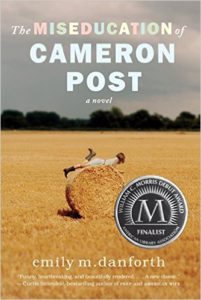 The Miseducation of Cameron Post is a pretty unusual book for contemporary YA. First, it’s pretty long. It reads more like a memoir than a novel. I would classify it as literary fiction. I think maybe it’s a little short on clear traditional plot.

But none of those things means it’s not great.

The novel starts with a 12-year-old Cameron, who has her first kiss—with a girl—in the first few pages. Soon her world is shaken by the death of her parents, bringing in her aunt as her caretaker. We don’t see much of her life before her aunt, so it’s hard to know exactly how truly different things end up being, but we do know that her aunt is much more religious than her parents. This high religiosity—and the relatively conservatism of the Montana city they live in—means Cameron tries not to really think about what she knows about herself and how different she is from everyone around her. Eventually, she gets found out about halfway through the book and her aunt sends her off to a radical school.

It sort of ends up like two books, because the only thing that’s not different about the second half is Cameron herself. The setting, the characters, the goals—everything else is new. The two halves read a little differently, too, with the second half faster-paced despite the fact that it focuses on a shorter period of time.

Regardless, I did read the book very slowly, but it was more to savor it the experience than because it didn’t hold my interest. It seemed to demand a slow read, in fact—I needed to digest it piece by piece. I should also mention that while it may be a novel about growing up a lesbian girl, but it didn’t necessarily feel like a coming-out book. It’s more about accepting and embracing who you really are. Personally, I found it really easy to relate to Cameron’s “differentness.” It didn’t hurt that she was born just two years later than I was, so her pop culture references were very familiar, but it was more about the fact that she just didn’t identify with the standard expression of femininity.