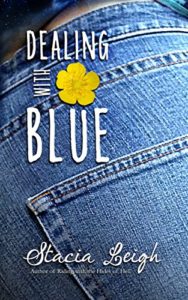 Dealing with Blue is a sweet YA romance featuring an unlikely partnership between Suzy Blue, a nice girl who might be a tiny bit uptight, and J.J. Radborne, a good guy who’s just been dumped by his long-time girlfriend. They’re really likable and credible characters who both grow (and grow up) through the book. I quite enjoyed the chance to get to know them. I should mention that Stacia is my critique partner so I had the opportunity to see not only the characters grow, but also the book itself. The end result is charming.

Suzy and J.J. have known each other since they were little kids, because they lived next door to each other for years. But when Suzy’s parents split a while back, she moved out to live with her dad. But now he’s been shipped off to a war zone and she’s forced to move back in with her troubled mom. I say “troubled” because she’s a hoarder, and this means things are difficult for Suzy. Personally, I really enjoyed this setup and watching how it all unfolds through the rest of the book. It’s a fairly honest (but not unsympathetic) look at hoarding and the way it touches the lives of people living with it.

J.J.’s life isn’t nearly so difficult, but it’s not all unicorns and rainbows, either. Getting dumped by his girlfriend really sucks. They were together forever and he thinks he really loves her. But he has a plan for this—make her jealous and she’ll want him back. Who better to help with this then his old pal, Suzy? All he has to do is teach her to drive so she can escape. It doesn’t occur to him to wonder why she needs to get away so bad, but it doesn’t matter since theirs will be a mutually beneficial deal.

Watching Suzy and J.J.’s relationship unfold is a lot of fun. It’s sweet and cute but wholly believable. Suzy is terrified of J.J. finding out about her mom’s hoarding, and the whole time I was wondering how J.J. he would react when he finds out (because of course, he has to). The resolution is interesting and satisfying.

Another way that the book provides an unusual perspective is that it feels more like J.J.’s story to me. Usually a romance focuses on the girl’s perspective, so if you like seeing more of the guy’s perspective, you’ll especially like this.

You can buy Dealing with Blue on Amazon US