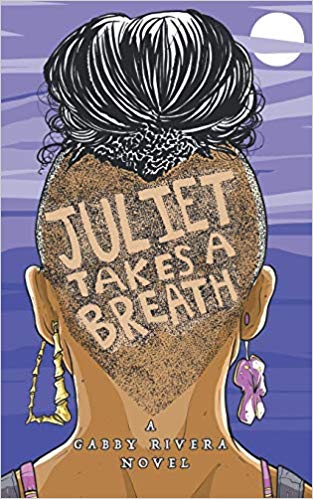 Juliet Takes a  Breath was recommended to me by a friend for being something you see very little of. It is about feminism for queer brown girls, with white feminism and privilege being criticized freely and often. So, as a white person, it can be hard to read. Much of the criticism makes sense; some of the things that the white women in the book do are realistic and I can see how they’re irritating or worse, even when they’re well-intentioned (though not all the instances in the book are). Despite the general sense of uncomfortableness that surrounded me while I read it, I liked it and found it engaging.

Juliet is a short, chubby puertorriqueña from the Bronx. She has just finished her first year of college and now has a white girlfriend she’s in love with. She has decided to come out to her family at the dinner table the evening that she’s leaving to start an internship for a feminist author in Portland, Oregon. She doesn’t know how it’s going to go and she’s distressed when her mom basically hides from her at the revelation. She leaves for her internship and is thrust into the wild world of Harlow Brisbane.

Harlowe’s the author of a famous (fictional) book of New Feminism called Raging Flower: Empowering Your Pussy by Empowering Your Mind, which has done well in certain circles. Not long after Juliet arrives, Harlowe gives her a seemingly impossible research task. Soon after, Juliet meets a male nudist in Harlowe’s house who makes her feel inferior in her queerness by asking challenging questions. She learns Harlowe’s in a polyamorous relationship with a black woman named Maxine and they all go to a writing event for women of color where white women are allowed to attend but not speak. Juliet doesn’t get why the white women must remain quiet until she overhears a couple of them talking.

From here, Juliet begins her research at the library and gradually gets exposed to more and more challenging and confusing ideas about gender, sexuality, race, love, and more. There is a crisis with Harlowe where she does something that makes Juliet feel objectified and Juliet flees to be with her older and wiser cousin in Florida. The cousin helps her finally start to understand all the confusing ideas she’s been bombarded with in Portland. Juliet comes back armed with knowledge and we see her come into her own with the women around her.

As I mentioned, the book will be challenging for white readers but still very much worth the read. But it’s not written for white people; it's for for young queer people of color and it will ring true, I am sure. It was first published in 2016 in paperback by a small press but it looks like it’s being reissued in hardback in September, probably because it’s done relatively well. Check it out.