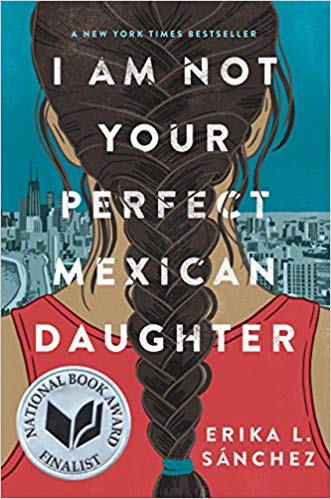 This is a really interesting and unique book. It’s steeped in Mexican-America culture, but not really in a positive way—the main character, Julia, basically hates every aspect of it. To me this was interesting because one of the reasons she hates it is that she can’t navigate it well—she’s socially awkward, but not in the “standard” way (at least this was my take on it). No, she says and does the wrong thing for her culture, which might be okay in white American culture (though definitely not always).

The book opens just after Julia’s older sister, Olga, was killed when she accidentally walked in front of a moving semi. Julia is of course upset by this even though they weren’t particularly close anymore. But what has a more direct impact on her life is the way her family is handling it—her mother has completely withdrawn and her dad is as silent as he ever was. What’s more, Julia figures out that there was more to her sister than anyone thought, but she can’t figure out what was going on.

As things get back to normal, we can see that Julia’s still not okay, but it becomes clear that it’s not really about her sister. Her mother is incredibly controlling and doesn’t let Julia do much of anything. She’s supposed to want to stay home like any good Mexican daughter should want (and like her sister). But Julia’s “different”—as her mother puts it when she’s being nice about it—and wants other things out of life. First, she wants to be a writer and has befriended her English teacher, who thinks she’s one of his best students ever. She wants to go to college. She wants to go to an occasional party and maybe have some friends, even though she’s as awkward about that as she is with her family. Her mom doesn’t want any of those things for her.

One thing I have to mention is that Julia isn’t necessarily very likable. She’s not nice or very appreciative of the people around her and she generally says what on her mind without thinking much about it first. But as I’ve said here, she’s an interesting character and I did care about what happened to her because in some ways she's making the best of a bad situation (one that's bad for her, not necessarily everyone).

I think this is an important book because it teaches about a culture in a way that doesn’t sugar-coat things. It also addresses depression (which I didn’t expect, honestly—I knew we were skirting the topic but I thought that’s all we’d do). Julia’s a character worth getting to know, even if you’re not going to necessarily want to be her friend.