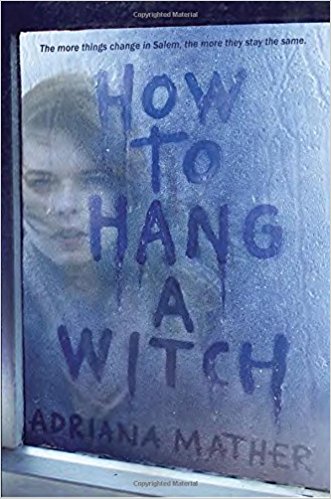 I joined one of those new monthly book clubs where they send you a book you aren’t specifically expecting, and this was the first one they sent me. I hadn’t heard of it, although I was at Barnes and Noble the other day and they had about 5 outward-facing copies on display, so I’m guessing it’s gaining in popularity. It’s certainly got good reviews on Amazon (4.8 stars, which you rarely see).

It’s an interesting book about the Salem Witch Trials and the modern-day consequences—and how that relates to bullying. Which ies a really interesting take on the situation. Mather (the author) is a direct descendent of Cotton Mather, who is famous as the instigator of the Trials. So her main character, Samantha, is also one of his direct descendants. She moves to Salem into her dead grandmother’s house with her stepmother after her father has gone into a mysterious coma.

This triggers what appears to be an old curse that’s only active when all of the descendants of the major players of the Trials are in town. There’s a group of goth kids—four girls an a boy—who are known as The Descendants, because their direct ancestors were the ones executed in the Trials. Since Sam is a direct descendant of the man who started it all, they hate her. And the rest of the town, including many of the school’s teachers and administrators, also dislike her.

That’s partially where the connection to bullying comes in. Mather’s point is that its somewhat arbitrary—it can happen to anyone for any reason, but the community as a whole has to support it. This rings true for me, as although we usually view bullying as a kids’ problem, in many cases adults are nearly as complicit. In may own experience of being bullied, many adults explicitly blamed me while others just looked the other way. In her Author’s Note, Mather says, “Group agreement and group silence are equally as deadly.”

Anyway, in the book, The Descendants don’t like Sam and they blame her for the string of deaths and bad luck that have been hitting their families since she arrived. But Sam befriends a prickly ghost living in her house who also helps her uncover the cause of all the deaths, which can be traced back to the time of the Trials. Sam tries to tell everyone that the curse isn’t new and that she and her father are both in as much danger as anyone else, but instead they continue to blame her. Somehow she has to convince The Descendants to work with her to break the curse.

Sam is a complex character trying to make sense of her past. She’s grown up believing she’s cursed, so when she finds out she sort of really is, it’s a shock and she has to figure out how to deal. Her stepmother is also interesting because it’s really hard to tell if she’s good or bad or what. The ghost and his formal way of speaking are entertaining. Also, I should mention that there were moments late at night when I had to put the book down because I was getting a little creeped out. I get a tiny bit superstitious in the dark. A ghost, creepy woods that Sam is sensible enough to be scared of, and magic.