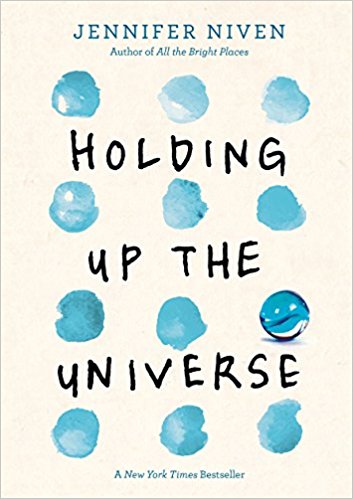 Niven’s other YA book, All the Bright Places, is probably going to remain one of my favorite YA novels of all time. So Holding Up the Universe had a lot to live up to, for me.

The premise is definitely interesting. It’s about two kids with major and out-of-the-ordinary challenges in their lives. Libby Strout is extremely overweight and Jack Masselin has a severe case of face blindness.

Libby is returning to school after being homeschooled for many years—initially because she was housebound due to being so overweight that she couldn’t leave her bedroom, so overweight that they had to break a hole in the wall to get her out of the house. She got fat after her mom died several years earlier and she tried to eat her way through the grief. She’s lost a bunch of weight and is looking forward to returning to school even though she was bullied during her time there as a younger kid. She has great hopes for her return and is shot down pretty quickly. Still, she manages to make a handful of friends and plans to audition for the school’s dance team if a spot opens up. She may be a target, but she’s not a withering flower. Not at all.

Jack’s an interesting case. His face blindness makes all social interactions difficult for him and several times he’s humiliated himself mixing people up. Niven does a fantastic job of keeping us constantly aware of his challenges. Jack recognizes people based on unreliable clues and context. It’s easiest at home, since everyone is a different age or gender, but even there it’s dicey. For instance, he’s in his bedroom one morning before school and thinking about his brother, Marcus. “When a tall boy with shaggy hair comes into my room and starts yelling at me, I figure it’s him.” Then “a woman appears at the door and wants to know what in the Great Fanny Adams is going on.” Jack coughs, “which makes her point to the door and tell the tall/shaggy boy to get the hell downstairs.” Then he looks out the window at everyone leaving, including his little brother, Dusty, and summarizes it like this:

The woman climbs into one car with this little kid, and a man with thick dark hair gets in another car with the tall/shaggy boy.

It’s funny, sure, but it also perfectly conveys how nightmarish everything is.

Libby and Jack first encounter each other when he basically assaults her as part of a cruel prank, stuffing an apologetic note in her backpack at the same time. She retaliates by punching him, so they both have to go to this after-school group counseling session and eventually get to know each other and find out they have more in common with each other than they could have imagined. They get closer and help each other through some rough patches.

If you enjoyed the emotional depth of All the Bright Places—or just like books full of raw and at times intense emotions—you will enjoy Holding Up the Universe. It’s also just interesting to get a flavor of true face blindness.