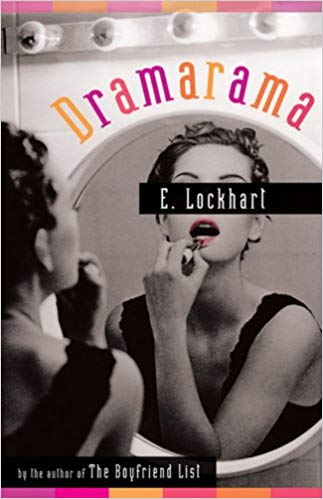 First, I have to say that Dramarama plays heavily with stereotypes—namely Gay Best Friend and Theatre Geek. However, it’s not a bad thing at all because Lockhart brings both to life so effectively.

Sarah is a big-time musical theatre fan in a small-time, boring Ohio town. When she meets Demi at an audition, she finds a kindred spirit and the two of them become inseparable. Demi, who is black and (closeted) gay, gives Sarah her stage name—Sadye. They are classic theatre kids—overdramatic, enthusiastic, and physical. When both of them manage to get into a summer program at an elite performing arts school, they’re ecstatic. And off they go.

This is where things get interesting, because they’re separated into different dorms and soon their friendship is going to be tested. Demi fits in immediately. He’s able to be comfortably out of the closet and he just explodes into the talented performer he is. Sadye struggles more. She’s sharing a room with three other girls, two of whom really intimidate her, while the other she views as desperate and uncool.

Sadye’s friendships with her roommates develop and she watches them succeed while she feels like she’s not doing as well as she should. They are all taking classes and preparing for two different shows, one of which is early in the summer and so comes pretty quickly. Sadye enjoys that even if she didn’t get the most important role. But everything starts to get complicated as the summer progresses.

Really, I couldn’t relate to either Sadye or Demi, as I couldn’t be more different, but that didn’t make them uninteresting characters. Sadye is wonderfully flawed. She’s not always likable, as she does some unpleasant things, but we can see where those actions come from and we empathize. She’s a very realistic teenager.

The ending of the novel surprised me a bit. It didn’t happily tie everything up. I mean, it tied everything up like it needed to, just not really happily. There was element to it that I felt was a little out of the blue and maybe not the best possible ending, but it didn’t make me not enjoy the novel. Also, Demi didn’t behave quite like I would have in the ending. Still, much of the book was fun because of the characters and setting rather than the plot itself.

One other little thing that was kind of fun for me is that all the kids admire Kristin Chenoweth. (Sadye is distinctly not Kristin-ish, being rather tall.) Kristin is from Oklahoma and graduated from Oklahoma City University, where I’m doing my MFA (it apparently has a great musical theater program), so that was a little cool.

If you’re a fan of Lockhart, you’ll want to read it, even though it’s different from her others (actually, all her books/series are different from each other). It would also be enjoyable both for kids who grew up a part of the theatre world and those of us who only observed wryly from afar.