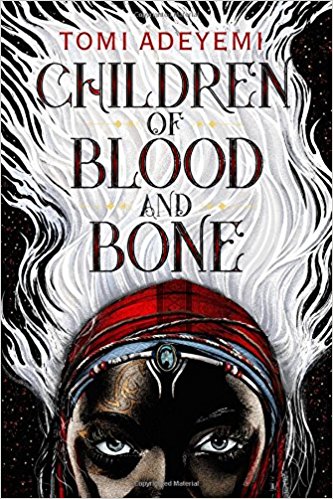 There’s a lot of hype surrounding this book (for instance, I saw Entertainment Weekly called Adeyemi the next J. K. Rowling). Hype can be both good and bad. It had a lot to live up to, but I was still excited to read it, even though it’s way longer than my normal reads.

If you haven’t already heard about it, Children of Blood and Bone is an epic fantasy with all the elements you’d expect—magic, sword fights, magical artifacts, and an epic journey—but it’s set in a world inspired by Nigeria and West African legends. It’s a story of oppression, unjustified violence, class, and privilege—and it’s cast is entirely black. Eleven years before the book opens, the king of Orïsha killed all the maji (people who could use magic) in the Raid. He also did something that destroyed the ability to do magic, but he let divîners live. Divîners are children who will become maji when they reach the age of thirteen, but now that magic is suppressed, they won’t. Divîners and maji both are marked with white hair so it’s instantly clear who they are. The divîners who survived the Raid are treated very badly (this is a significant understatement) and called “maggots” as the slur of preference.

The book features three teenage characters who all have POV chapters: Zélie, Amari, and Inan. Zélie’s the main star, being a divîner and effectively chosen by the gods for the book’s important quest. Amari is the kingdom’s princess and Inan is her older brother. Amari sees her best friend killed by her father for no good reason. She flips out, steals a magic scroll, and flees. Poor Zélie is the one she runs into and who helps her escape. Prince Inan is sent to retrieve Amari, with instructions to bring her back alive—unless people find out what she did. Once Zélie and Amari (plus Zélie’s brother Tzain) reach Zélie’s village, they learn that there is a way to bring magic back to the land. Thus begins the quest. The three of them head out, with Inan on their heels the whole time.

The book’s very well-plotted and pacing is good. In my view, quest books frequently end too rapidly. This one moved quickly at the end, but it didn’t wrap things up prematurely. The ending was very satisfying.

All three main characters are amazing—they’re multi-dimensional and well-developed, with each of them changing dramatically over the course of the book. Their emotional journeys are all interesting and deeply-felt. Zélie’s brother is the fourth major character and while he doesn’t change as much as the others, he’s still important to their character arcs.

Then, the world building is fantastic. The magic system is unusual (at least in my experience) and well-explained. I loved that the language of magic in Orïsha is Yoruba, a real language native to Nigeria. I also appreciated all the slightly gratuitous diacritics on so many of the place names and magic-related words. And they ride giant cats. Cats!

I do have one complaint about the book, but it only detracts from the full reading experience a tiny bit. That is that a lot of the conflicts are resolved to easily and quickly. Some terrible obstacle would be thrown in their path and then some solution would appear. For instance, when they’re needing to charter a boat to an island at one point, they have to convince the captain of a ship to do it for no money. I didn’t 100% buy his fast acquiescence.

Despite that, it’s an excellent book that you should seriously consider reading. YA fantasy lovers should definitely love this one, but I think it’s fresh and engaging enough that even those who don’t read that should enjoy it. I’m definitely watching for the sequel.